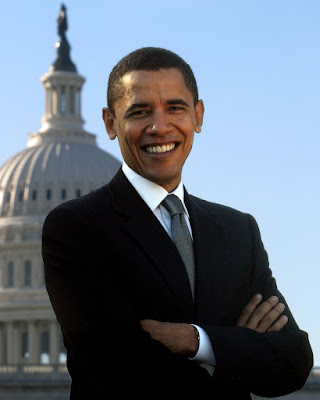 It is accomplished.
Once more time, the United States of America has had a peaceful transition of power. This time, the power not only was handed to a new generation, it was handed to black man.
It is almost beyond grasping how significant this is.
Barack Hussein Obama is the 44th president of the United States.
I lost count of how many times I had tears in my eyes.
Even the stand full of dignitaries looked more like America -- it wasn't the sea of white male faces we are used to seeing.
I rejoice to see this moment in history I thought would be much longer in arriving.
I rejoice that my grandsons are a bit puzzled as to why the grownups see this as such a big deal. Their surprise is that Obama is the first African American president. Their friends are a rainbow of colors and religions and diversity is woven into the ordinary moments of their life in a way it was not in mine, or even their mother's.
They do not believe the world that matters is all-white. And that gives me hope.
Here is what I wrote on Nov. 4, having just spent 10 days in Africa:
I believe that white Americans can only dimly grasp the hold Obama has on the imagination of the world inhabited by people of color. It is strongest, I think, in those parts of the world where people of color were colonized by white people. His achievements appear to be somehow helping to balance out centuries of oppression, humiliating occupations, and patronizing and demeaning laws and regulations imposed on them in their own lands by colonial masters.

Win or lose, they have taken him into their hearts.

If he wins, for the first time the majority of the world's people will see a president of the United States who looks like them instead of like those who have historically oppressed them.

If he wins, President Obama will enjoy an advantage in working with the governments of all these nations that no white person has ever enjoyed.

I cannot remember a time when so many people wished so much good for an American presidential candidate, or when people around the world held a candidate as close in prayer as they do their own families. Who knows what will come of this unprecedented outpouring of good will?

We are entering uncharted waters here, but the weather signs are more promising than they’ve been for most of my adult life.
Posted by Katie Sherrod at 12:06 PM