This rainy Saturday seemed a good time to continue work on my project of turning an unused room into a guest room.

This has meant sorting through a desk and three crammed book shelves, so it's been time consuming, mostly because my heart keeps stumbling over relics of Gayland.

Today I was stopped completely by a note he had given to me on Mother's Day, 2000, along with a gift of two joined hearts in Steuben crystal. The hearts sit on a shelf in my living room. The note had been tucked into a drawer. 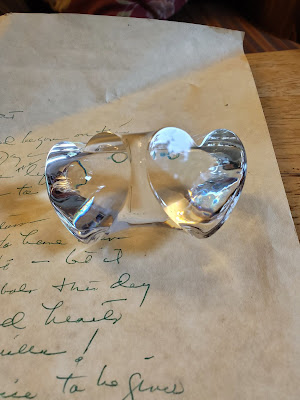 
Blessed be you on this Mother's Day - and joy to hold dear the life you give and rejoice to see in fullness.

This bit of glass was to have been a Valentine gift -- but it better symbolizes this day and the joined hearts of you and Daniella!


So I rejoice to be giver and rejoice to see the joined hearts and share the giving love from your hearts.


If you were ever the recipient of a note from Gayland, you recognize his stream-of-consciousness writing style. 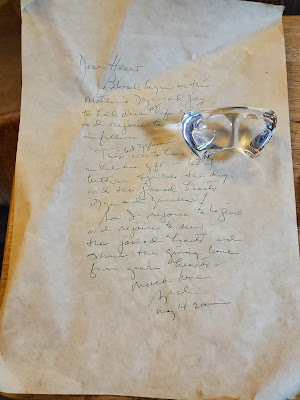 He wrote in full throat, never stinting on emotion or bothering much with punctuation. He loved dashes, and the fact that there are only two in this note is a bit unusual. And while I treasure all notes from him, this one is especially precious, for in it he at last reveals that he has started to understand the relationship between me and my child, a relationship that, early on, had startled him, puzzled him, and, yes, made him jealous.

He never had children of his own, and inheriting an adult woman as a step-daughter was a step into a totally unknown world. His relationship with his parents had been loving, especially with his mother, but he was taken aback by how very close Daniella and I are.

He was just plain jealous of the time she and I spent together, and sometimes, he was a bit of a brat about it. He was a world champion pouter, and I called him on it many times when we were visiting Daniella when she lived out of state. He would grumble and deny it and then eventually apologize. I think even he was surprised by his jealousy.

Eventually he came to understand that my love for him was in no way affected by my love for her. It was odd that a man so gifted in loving others was so worried that, in this one case, there wasn't enough love to go around. He would still have his moments, and Daniella and I would still call him out on it, but he truly did love her and her sons. Seeing her become a mother was amazing to him, and those two baby boys were the absolute light of his life.

So I watch as the joined hearts catch the light and give it back, much as his heart did every day in so many ways.

I miss you, dearest man.
Posted by Katie Sherrod at 7:17 PM 3 comments:

Brightness falls from the air 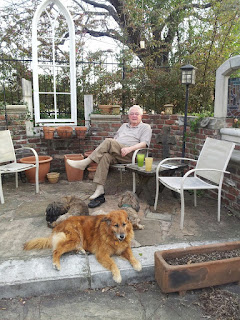 Beauty is but a flower
Which wrinkles will devour;
Brightness falls from the air;
Queens have died young and fair;
Dust hath closed Helen’s eye.
I am sick, I must die.
Lord, have mercy on us!

But oh! How that one line speaks truth to those who have lost someone they love.


Brightness falls from the air.

That's exactly what happens when, in the midst of going about my day, I am blindsided by a vivid memory of my love. Anything can trigger it -- a view, a song, a news story, a flower, a sentence in a book, a TV show. Whatever the trigger, a vivid memory of Gayland springs full blown into my mind's eye, and for a split second, he lives in my mind. Then reality intrudes and -- brightness falls from the air.

Sometimes it lasts only a minute, and I am able to recover without anyone noticing that this black cloak of grief just enveloped me. Other times, it lasts for days, this bleak hopelessness. When this happens, I just fake it. Why suck others into my bleakest times?

When it hits, the blow of grief has a physical impact. I feel my shoulders drop, my hands fall to my side, my knees weaken. Once in a while -- thank God only when I'm alone -- it has literally knocked me to my knees.

When that happens, I just sink down and sit there and let the dogs comfort me, as in their loving doggy concern they nudge me and lick me and lean close to me. When sometimes in the night I rise from my sleeplessness and walk outside, they all come with me, even the cat, and we walk the garden in the post-midnight hours, pacing back and forth between the garden "rooms" he and I created together until I am exhausted enough to go back to bed.

And then, as if to make up for the black times, a period of tranquility will arrive, allowing me days of peace when I am allowed to believe I have come to terms with the loss of him.

Oh, I am functioning. I am even having fun. I spend time with people I love. I work on projects I care deeply about.

But the impact of the loss of Gayland is never far from me.

Perhaps one day these moments will elicit only a fond smile. But for now?

For now when they come, they take the light with them, and brightness falls from the air.
Posted by Katie Sherrod at 9:29 PM 3 comments: