A couple of weeks ago, I bought myself a potted Amaryllis bulb at Trader Joe's. Gayland used to give me one on or right after my birthday, figuring it would be open for Christmas -- and it nearly always was.

The Greeks called these beautiful flowers Amarullis, which means “splendor” or “sparkling.” Even the unopened bud is very shiny. 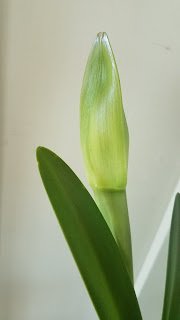 The Greek poet Virgil wrote that this stunning red flower once was a shy nymph named Amaryllis. She fell deeply in love with Alteo, a shepherd described as having Hercules' strength and Apollo's beauty, but who paid attention only to his plants and flowers. He did not return her affections. Heck, he didn't even notice her existence. 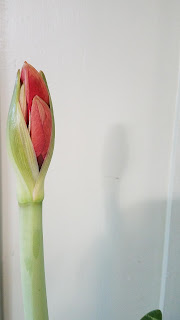 Hoping that she could win him over by giving him the thing he desired most - a flower that had never existed in the world before - Amaryllis sought advice from the oracle of Delphi. 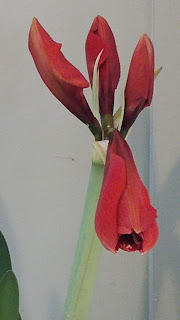 Following the oracle's instructions, Amaryllis dressed in maiden's white and appeared at Alteo's door for 30 nights in a row. Each night, outside his door, she pierced her heart with a golden arrow, causing blood to fall to the ground. Finally Alteo opened his door. There he beheld a gorgeous scarlet flower, sprung from the blood of Amaryllis's heart. 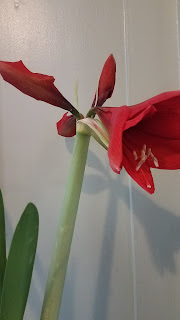 Well, that got his attention. He got his unique flower, Amaryllis' heart was healed, and she got the object of her desire. One hopes they were happy with the bargain. One also thinks the oracle was a creep. 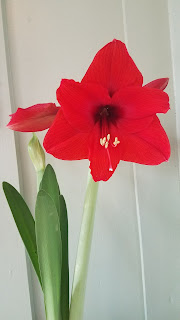 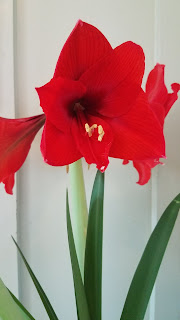 I say it should symbolize the lengths to which some besotted young women will go to catch the attention of an oblivious male. 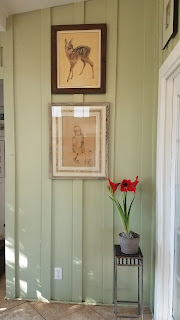 For me, it's a sweet echo of gifts of beauty from my absent love. This particular Amaryllis has put out two shoots, creating an absolute spectacle of itself. Gayland would have loved it. 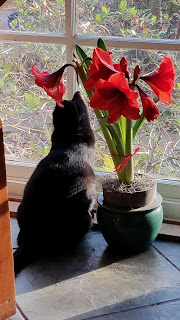 Sable has adopted it as her own personal stage setting, sitting beside at every opportunity because she knows its bright red enhances her sable beauty.

It IS gorgeous. Looking at it makes me smile through my tears.
Posted by Katie Sherrod at 6:43 PM 1 comment:

We humans like to mark time off in significant chunks -- a birthday, a holiday, an anniversary. I guess we think it gives us some control over things -- one of the many things we kid ourselves about in life.

Yesterday, December 11, was the anniversary of his death. A year. Three hundred sixty five days without him.

The presence of his absence still is enormous, filling up most of the space in my life. I maneuver through and over and around it, but still, it can suck all the oxygen out of the room in a nanosecond. It ambushes me multiple times a day as I live and work and have my being in this space we created and occupied together. He left his mark on every square inch of this place I call home, so while I love it, and it is indeed a refuge, it also exacts an emotional toll.

This manifests in seemingly irrational acts, because inanimate objects become sacred holders of memory. Silly things, like two juice glasses in the dishwasher. 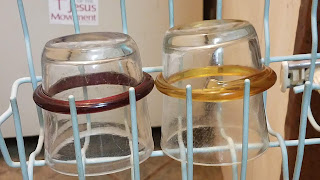 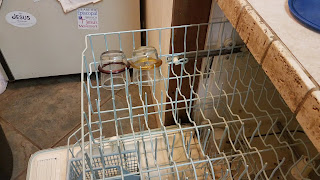 There they sit, the two cleanest juice glasses on the planet, because I haven't been able to move them from the place he last put them. Every morning he would pour juice for us, mine in the glass with the red ring, his in the glass with the yellow ring. They were the last glasses remaining from a set of eight that he bought years ago in one of Neiman Marcus' "gifts under $25" sales ( he loved those sales). Every day after breakfast he would rinse them off and put them back in the dishwasher. He did so that last day at home. And there they have remained. Not being used, but getting washed regularly. Silly. Like I said, grief can make you do things like that.

Earlier this year I wondered what it would be like, a year out from his death. I hoped it would be easier, that the pain would lessen, become more bearable. And I guess that has happened to some degree. But there are times the grief still is so raw it's as if he just died. I find myself angry -- angry that he's gone, angry at the many physicians who failed to diagnose a damn urinary tract infection that eventually became septic and killed him, angry at a medical establishment -- a world -- so ready to write off a man becoming increasingly frail because, hey! he's nearly 80.

The rage is huge and a little scary, so I try not to inflict it on anyone else. And I try to direct its fire into work that might make the world a little better. God know there's lots of that work around.

Anger and grief use up a lot of energy, I've discovered. At the end of the day, I am often just done, able to do little more than sit in my chair and hold a book. Sometimes I even read the book. Sometimes I watch TV, although often I discover I have zoned out and missed significant chunks of the show. Thank God for rewind.

Motion is what gets me through the day. I move from one task to another, one project to another, one hour to another. I am grateful for generous colleagues who have been willing to abide with my distraction, to put up with some missed deadlines, to be flexible on the days I can barely move.

I am most undone by the kindness of people -- the flowers close friends sent yesterday, the quiet glances, the prayers, the notes.

Because the grief is still right there. Right under the surface of my composure, lurking. And the season isn't helping much, calling forth memories with every emotionally laden holiday chore.

What does help is that The Episcopal Church is in the season of Advent, a time of reflection, preparation and anticipation. Virginia Theological Seminary offers #AdventWord, "a global, online Advent calendar. Each day from the first Sunday of Advent through Christmas Day, #AdventWord offers meditations and images to inspire and connect individuals and a worldwide community of believers to the themes of Advent. You can stay up-to-date by signing up to receive #AdventWord emails here, visiting AdventWord.org, and following the project on Facebook and Instagram."

The AdventWord for today is #Rough, a reference to John the Baptizer saying that "'the rough ways will be made smooth' in preparation for the coming of God."

I am intimately familiar with the rough ways - my very soul has been abraded by the harsh emotional winds of this last year. Grief still resides in my throat, making it impossible to sing, or even say some prayers out loud.

The #AdventWord for December 11 was #Go.

But I have no idea what comes next, for grief isn't a tidy linear process. It follows no rules, listens to no rational explanations, heeds no timeline, schedule, or plan. It is the shadow of the Holy Spirit, blowing where it will, when it will, taking no prisoners.