It is the First Sunday after Christmas and it is New Year's Eve.

So here we sit in the midst of the Christmas season (really- Christmas only STARTS on Christmas Day - it lasts 12 days) as well as on the cusp of a new year.

Today we are all Janus, "the god of beginnings, gates, transitions, time, duality, doorways, passages, and endings". Like Janus, we face two ways at once, looking back at the old year, looking forward to the new.

At the best of times, it can be bittersweet. But for me, 2017 always will be the year Gayland died. Full stop. So looking back brings happy memories as well as heartbreak.

And looking forward? Well, none of us can tell the future, but generally we know with whom we will be moving into it.

Stepping alone into 2018 is not what I expected. Going forward without my love, my friend, my partner in creation, my sounding board, my wall against which I could throw ideas, no matter how wild, unreasonable, crazy, funny, or idiotic; my shelter from the storm, my muse, my companion, my challenger, my advocate, my intercessor,  my guide, my charge, my bread baker, my co-conspirator, my man of many parts . . . well, it seems impossible.

But of course it isn't impossible. Time doesn't stop just because his temporal presence has stopped. It just seems as if it has. The world seem curiously muted and blurred, as if everyone and everything has retreated to a great distance from me. Or I from them. It's hard to tell.

I turn into our driveway and see his car, and for a split second I smile because that means he's home. Then reality slams back into place and I can barely see, much less breathe.

Make no mistake. Sorrow hurts. It is a very real, very physical pain. My chest is sore, my muscles hurt, my heart aches.

I know his new year will be wonderful.

All I know of mine is that it will be a time of reinvention, of carving out a new way to live as me, alone. For while he and I each had vibrant separate lives, those lives were incredibly enriched by the life we had together. We were each strong alone, but together we fed our respective strengths and helped each other develop new ones. We trusted each other's love to endure through anger, through frustration, through exasperation, through all things human. Most of all, we could be vulnerable to one another, each knowing we were safe in the care of the other. 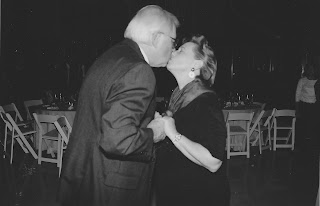 Days in the aftermath of his death


Katie Sherrod
December 11 at 8:49pm ·
Stop all the clocks, cut off the telephone,
Prevent the dog from barking with a juicy bone,
Silence the pianos and with muffled drum
Bring out the coffin, let the mourners come.

Let aeroplanes circle moaning overhead
Scribbling on the sky the message He Is Dead,
Put crepe bows round the white necks of the public doves,
Let the traffic policemen wear black cotton gloves.

He was my North, my South, my East and West,
My working week and my Sunday rest,
My noon, my midnight, my talk, my song;
I thought that love would last for ever: I was wrong.

The stars are not wanted now: put out every one;
Pack up the moon and dismantle the sun;
Pour away the ocean and sweep up the wood.
For nothing now can ever come to any good.
W.H. Auden 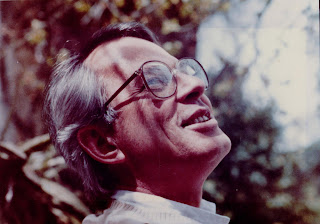 
Katie Sherrod
December 13 at 8:02pm ·
i carry your heart with me(i carry it in
my heart)i am never without it(anywhere
i go you go, my dear; and whatever is done
by only me is your doing, my darling)
i fear
no fate(for you are my fate, my sweet) i want
no world(for beautiful you are my world, my true)
and it's you are whatever a moon has always meant
and whatever a sun will always sing is you

here is the deepest secret nobody knows
(here is the root of the root and the bud of the bud
and the sky of the sky of a tree called life; which grows
higher than the soul can hope or mind can hide)
and this is the wonder that's keeping the stars apart

i carry your heart(i carry it in my heart)
e. e. cummings

Katie Sherrod
December 14 at 1:38pm ·
A note from a friend who perfectly described Gayland: "My thoughts and prayers are with you with the passing of Gayland, a truly lovely and loving man, playful and wonderfully mischievous in the very best way to coax people trapped in habitual and inadvertent injustice to take steps toward the obviousness of kindness and generosity in new venues to previously marginalized folk."

Grief, a strange challenging companion, has come to take up residence with me. Grief is mutable, protean - waves of sorrow on a silvered sea become a sunlit Tuscan meadow where happy memories reside become a thieving presence making away with entire trains of thoughts become a safe vessel in which are stowed tiny moments of grace become a wild storm ripping away sleep to fling me hard into the void of his Absence.
Absence.
Absence is astonishingly present, filling up entire rooms, houses, gardens, churches, cities, mountains, sucking the air out of lungs, making ears ring with the heart's keening.
Absence is astonishingly big and noisy, barging into the midst of anything it damn well pleases and taking over.
Absence is astonishingly small and silent, slipping through the tiniest vulnerability one tendril of pain at a time.
And so every morning, the daunting task of navigating a way into a world so thoroughly and completely marked by his physical Absence begins again. 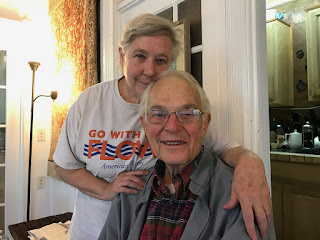 Last photo of us together, taken in mid-November.

Katie Sherrod
December 21 at 10:50pm ·
So we come to the shortest day and the longest night of the year -- the Winter Solstice, when it seems as if light will never return.
My Winter Solstice has lasted eleven whole days so far, although I do have faith the light will return. Eventually. It's just that I can't quite see it right now. 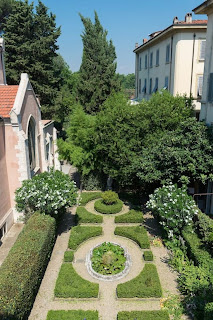 On our honeymoon in Italy, we stayed in the rectory at St. James Outside the Walls in Florence. Our friends, the rector and his wife, had loaned it to us while they went to the mountains. Our bedroom overlooked a garden of the church. In the kitchen was an amazing espresso machine, full of buttons and levers and spouts and Gayland loved it. So every morning, he brought me a coffee in bed and we would lean back against the pillows, drink our coffee, look at the garden, and plan our adventures for the day. That started a morning routine that maintained throughout our marriage. He made coffee for me every morning, no matter if I had to get up at 4 am to catch an early plane or if I slept until 10 am. Then we'd talk about our adventures planned for the day.
Now he's off on an adventure that I can't share. And so I make my own coffee, and sit and stare at the garden, me and the cat and the dogs, amid the emptiness.

Today I brought Gayland's ashes home. They are in a dark forest green velvet bag with a beige drawstring. The bag is inside a polished walnut box, itself lined with coral panne velvet and fitted with with brass feet and handles. He bought it years ago, a bargain he got at a Bombay outlet story. If you knew Gayland, you know how pleased he always was to find fine things at a bargain price. The box has a few scrapes and worn places, because Gayland used it from time to time as a base for small sculptures in our house.

He was clear he wanted to be cremated, and he was constantly updating me on the places he wanted some of his ashes sprinkled. Each of the places on the list has its own part in the story of our marriage.

Here's a partial list - our garden, Jerusalem and Magda in Israel; Orvieto, Florence, and Rome in Italy; at Abbaye Notre Dame du Bec, located in Le Bec Hellouin in Normandy, France; also in France, the Left Bank of the Seine just at Notre Dame (where he proposed to me); at Chartres Cathedral and at the Royal Abbey of Fontevraud in the Loire (Robert of Arbrissel declared that the leader of his new order should always be a woman and appointed Petronille de Chemillé as the first abbess. She was succeeded by Matilda d'Anjou, the aunt of Henry II of England. The abbesses wore mitres, like bishops). Cuernavaca, Mexico.

I always reminded him he was going to have to leave me enough money for a round-the-world trip to accomplish all this, but alas, he didn't quite pull that off.

I've made the soup, lit the fire, poured my drink and found my book. Now I sit, holding a dog, and memories. 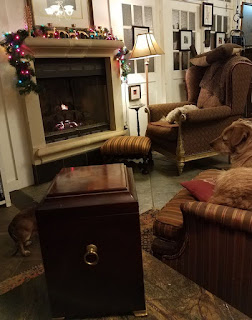 Posted by Katie Sherrod at 4:07 PM No comments: