Is religion a factor in oppressing women?

Here is this week's Texas Faith question in the Dallas Morning News and my response as a member of the Texas Faith panel.
------------------------
The question:
Nelson Mandela has formed a group called The Elders to address causes of suffering around the globe. One area that the council, which includes such members as Jimmy Carter, Desmond Tutu and Aung San Suu Kyi , has been looking at is whether religions oppress women.

In responding to this new organization, New York Times columnist Nicholas Kristof recently observed that:
Paradoxically, the churches in Africa that have done the most to empower women have been conservative ones led by evangelicals and especially Pentecostals. In particular, Pentecostals encourage women to take leadership roles, and for many women this is the first time they have been trusted with authority and found their opinions respected. In rural Africa, Pentecostal churches are becoming a significant force to emancipate women.

This week’s question is two-fold:
Do you think religions are a factor in the oppression of women? If so, how? If not, please explain your view.
Also, is Kristof right? Are Pentecostals ahead of the pack in encouraging women to take leadership roles?

My reaction on reading Kristof's column was, "Well, duh." But having a white male say this in the New York Times apparently makes it news.

Of course religions are a huge factor in the oppression of women, in fact, the major factor. Certainly the three Abrahamic faiths are. Feminist theologians have dealt with this for years. The recently deceased Mary Daly spent a career detailing the ways this is so and discussing the terrible consequences in the lives of women and girls.

Daly's statement, "When God is male then the male is god," perhaps explains it most simply. The insistence by the major world religions that God is masculine leaves women in the lurch. Men may be made in the image of God, but women? Not so much. It then becomes easy to name women as "the other," and once that happens, it is easy to justify all sort of mistreatment as "God's will."

If you trace the objections to women in leadership roles in religion back far enough, it invariably comes down to the fact that women are considered not quite as human as men. The Catholic Church spent decades debating whether or not women even had souls.

For centuries, men have claimed the spiritual realm while relegating women to the physical world. Having done that, men declared that women are "dangerous" to men's spiritual well-being because women are easily tempted -- all Eve's fault of course -- and thus in need of masculine control.

The fact that women bleed and do not die also frightened men, causing leaders of various religions to declare a menstruating woman as unclean and therefore, unworthy.

As to the Pentecostals? It is not hard to lead the pack in encouraging women to take leadership roles, since so few religions and denominations do so. Some progress is being made. For instance, The Episcopal Church started ordaining women in 1977, and now both its presiding bishop and the president of the House of Deputies are women. Lay and ordained women sit in both the House of Bishops and the House of Deputies and make up more than half the Executive Council, the body that governs the church between General Conventions. The presence of women in these leadership roles is changing the church, much to the dismay of those men who feel women have taken leadership roles to which they are entitled simply by virtue of their maleness.

Perhaps if a few more men begin to say what Kristof said, eventually the media might begin to pay attention to what women have been saying on the matter for decades. But I'm not going to hold my breath.
Posted by Katie Sherrod at 10:05 AM 4 comments:

Life has been busy, and I've been fighting a cold caught in October that became a sinus infection that became a bronchial infection that has hung on tenaciously, leaving me with limited energy.
A new round of antibiotics seems to be helping, so I'm hopeful I'll be back to normal soon -- or as close to normal as I ever get. One of the results of the lack of energy has been the neglect of this blog. I had all I could handle in trying to "do" Advent, get ready for Christmas, and also try to communicate all the good news coming out of the Episcopal Diocese of Fort Worth.
OK. Enough of the pity party, she said, coughing bravely. I'll try to catch up.
We are thawing out of what has been our part of the Big Freeze that has been sitting on most of the nation for what seems like forever. We haven't had it as bad as many parts of the nation, but for us, lows in the teens are rare. It's hard on our water pipes, on our gardens, on our crops and animals, and on humans, especially the poor, the homeless and the old. 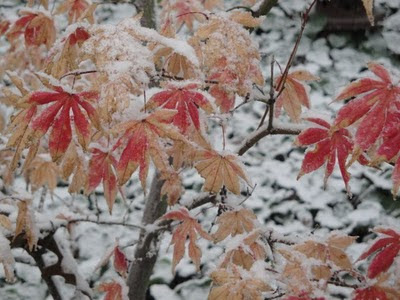 We had an honest-to-goodness white Christmas -- I know, I know, my friends in Michigan, New York and Canada will laugh and call it a powdered sugar Christmas, but for us, two inches of snow is a LOT. And it lasted for more than two days!!!!! 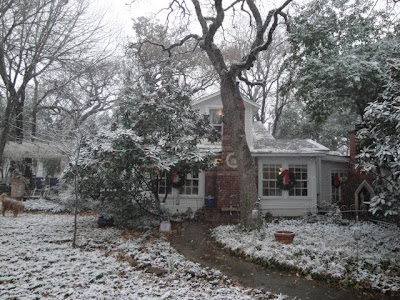 These photos were taken about 10 AM on Christmas Eve morning and much more snow fell afterward. 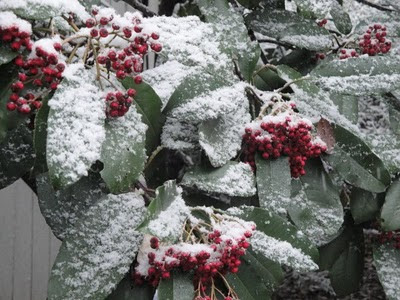 The garden looked like it had been sprinkled with fairy dust or the aforementioned powdered sugar. 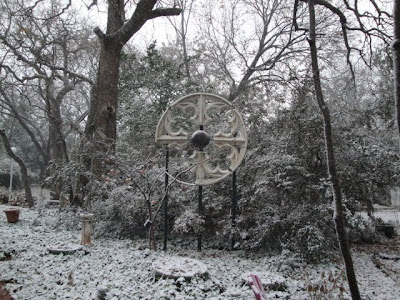 The Rose Window sculpture almost disappeared into the brush behind it. 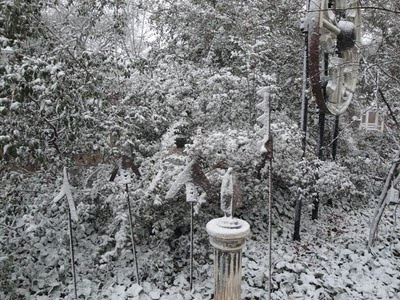 The warrior woman -- our tribute to Owanah Anderson -- stood stoically on her pedestal with her whitened standards flying behind her. 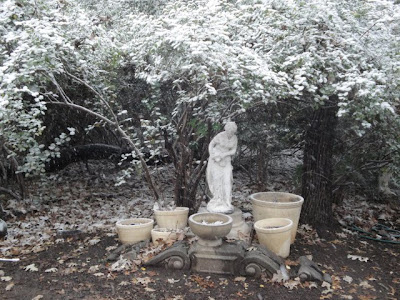 This white maiden sheltered under the winter honeysuckle. 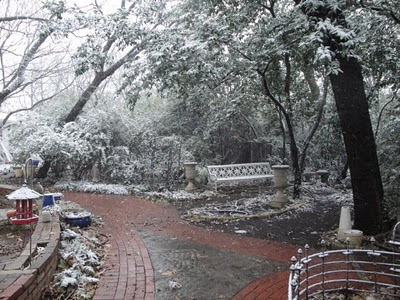 The walks were still clear but the snow was beginning to stick. 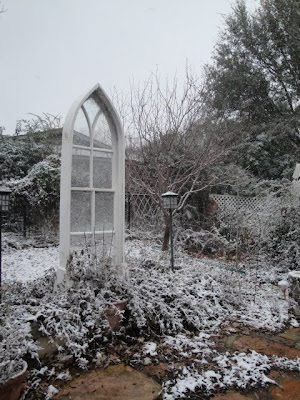 The Chapel Garden was turning into a White Garden. 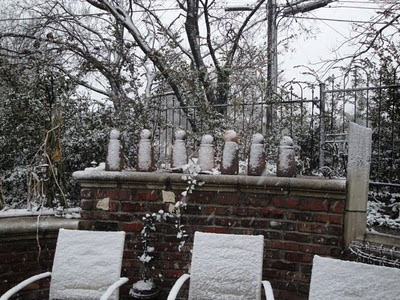 The Chapel Garden Choir sang bravely on in spite of the snow. 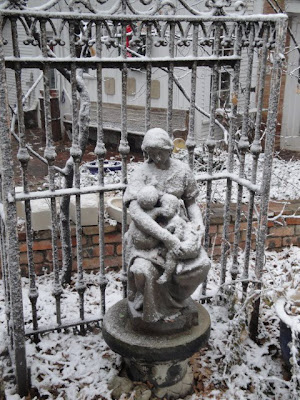 Mary snuggled with John and Jesus. 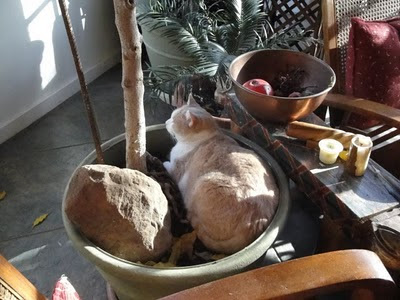 Simon snuggled in the ficus tree's pot in the sun. He's the lump on the right. [DON'T tell him I said that.] 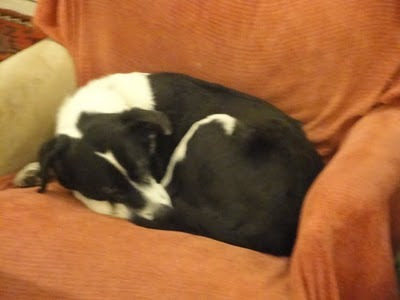 Mike snuggled in a chair in the Farm House. 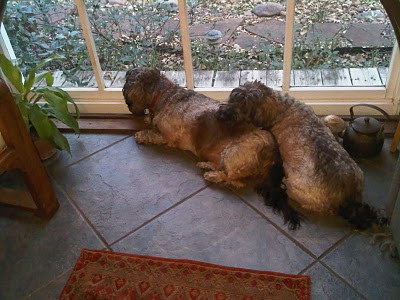 Wiggles and Toby snuggled with each other. 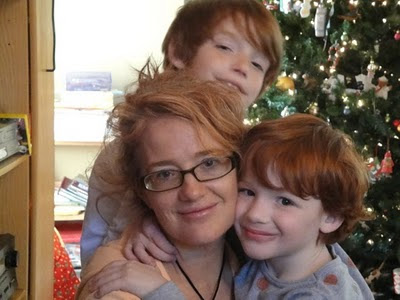 And Daniella snuggled with her boys, Curran and Gavin.
Happy New Year to all of you, Beloveds.