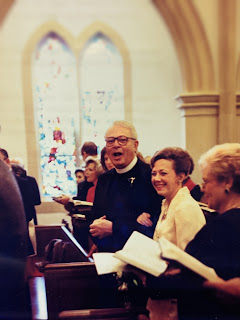 We thought getting married on All Souls' Day was a great idea, because the space between the living and the dead is thin on this day. We figured all the beloved folks who had gone on ahead would be among our clouds of witnesses.

Ironic indeed that the person I want most today is among those witnesses, probably working the room to make sure everyone gets greeted and loved on, just as you did at our wedding -- and everywhere else we went.

You have been much on my mind today, of course. I woke up thinking of you. The animals and I had to move out of the residence and into the farmhouse for three days while we awaited the pest control guy to come kill the thousands of yellow jackets who took up homesteading in the attic crawl space. After being stung twice I wasn't risking trying to sleep in the same building as those little devils.

The dogs were okay with the temporary move, because they are happy anywhere I am, but the cats were decidedly not. Sable refused to move off mother's couch and Danny pouted until he discovered the stairs and decided the entire farmhouse was a giant cat toy. At that point, he became a one-cat demolition derby, bouncing off walls and knocking stuff over right and left.

We all slept upstairs in the space that used to be my office. I turned it into a bedroom when I moved all my office stuff over to the residence. It's good to know first hand that it's a comfortable space for any guests who arrive.

Still, I kept thinking how much fun it would have been with you there, because you could turn an event like being run out of our house by stinging insects into an adventure.  You would have cooked some great meal, we would have pretended we were on vacation, had too much wine to drink, made love, laughed, and read to each other in bed.

Instead, I took an allergy pill and read until I got sleepy. Then woke up with no voice. Appropriate I guess, because since you died, I am unable to sing. I try, but songs just stick in my throat. So today, as I miss you madly, it seems right that I have no voice at all. Because there are no words I need to say. I said them all to you when you were still here -- told you of my deep abiding love for you, listed all the things about you that tickled me and drove me crazy, all the things you taught me and all the things we learned together, all the things I admired about you and all the ways you made the world so much better because you were in it.

I didn't know then how huge a presence an absence can be.

I miss you so much.

Posted by Katie Sherrod at 8:15 PM No comments: