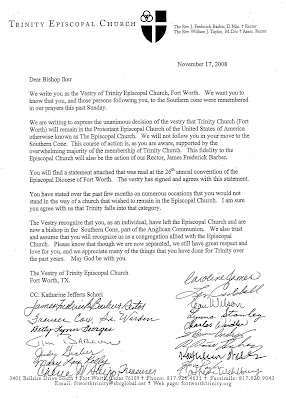 To their pleased surprise, they received the letter below from Iker, wishing them well, and offering them his "support, cooperation, and respect." He even added a nice hand-written note offering his condolences on the death of Jim Barlow, a beloved member of the parish. 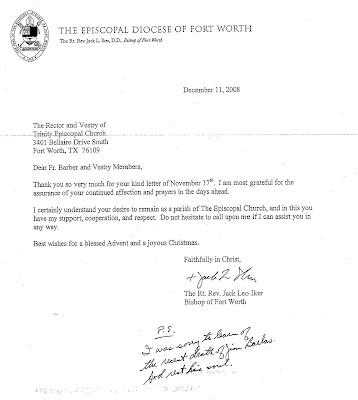 But then this last letter arrived. By now Jack Iker is no longer the bishop of Fort Worth. In fact, some of us are wondering if Jack Iker is still Jack Iker, or if he has become the episcopal version of Jekyll and Hyde. This is getting beyond weird folks.
Posted by Katie Sherrod at 7:34 PM

Weird, indeed. Trinity is my old parish, where I was confirmed about a hundred years ago. I'll be keeping them in my prayers as they deal with the mercurial Bishop Iker.

Weird? not in the slightest. It is pure Iker and so consistent to be almost a non issue'; it is so predictable.

I sincerely hope that Trinity's first point it to inform Iker that his group is not the EPISCOPAL Diocese of FW regardless of what he thinks.

Katie, I love your blog and thank you for the work it is to keep it up and running.

Katie ... I've known you long enough to know you have a really vivid imagination but even YOU couldn't make this shit up!

I would think that the first order of business would be to file the letter...immediately...in file 13 -- the circular one near the desk.

Has anyone thought about committing Jack? Delusions like this could lead to some serious problems for someone.

I am reminded of a chubby naked king strutting around in all his self-perceived glory...or maybe I am thinking of the wizard after the curtain is pulled back...

whatever - this is the stuff of fairy tales.

I suggest we do to Jack what he has been doing to the "General Convention Church" for so very long, ignore him.

I'm curious. Has Trinity taken a vote to the total parish to discover if 2/3 actually do wish to stay in TEC as provided in Canon 32? Seems to me a no brainer.

Trinity did not and will not participate in the Canon 32 process, since it is an illegal canon.
Our parish went through a two-year process of listening and it was clear from our vestry elections that the majority of the parish wanted to remain part of the Episcopal Church.
There is no legal way for a parish to vote to leave TEC.

I presume these letters are being passed onto the appropriate canonical bodies, that is those that represent the continuing Episcopal Diocese of Ft Worth, along with the PB? Prayers continue from the frozen north.

I read this one to Isabel who was busy with something or the other and who has been reading 'way too much WWII history lately. Her initial reaction was that Fred should respond to that letter with just one word, "Nuts!"

Just in case someone would think her serious, we agree with Barbie, to the round file with it.

Like it or not, Bishop Iker is still the bishop for all parishes in the Fort Worth Episcopal Diocese. The only thing that changed in November was the Diocese affiliation with an Anglican provice.

All parishes are legally bound by the C&Cs of the Fort Worth Episcopal Diocese. The provincial affiliation does not change that. Bishop Iker is still fully in charge.

For those parishes that wish to continue on the distructive path of the The Episcopal Church and the presiding bishop which aims at distroying the unity of the Anglican Communion, they are welcome to proceed via Canon 32. Bishop Iker is a very generous and loving individual who made sure these parishes had a legal means of disassociating with the diocese as such provisions did not exist beforehand.

For those parishes that wish to continue in the true Anglican tradition, there is now a new home that allows them to do this.

It would be best for everyone that Trinity, All Saints, and any other parish abide by the terms of Canon 32. It would be ashame if Bishop Iker is forced to make some changes in the vestry leadership.

Gee Erik, do I detect a threat? How unsurprising, given the way Iker operates.
You can hang on to your belief as long as you want, but there is no basis in reality for it.
There is no canonical way for a diocese to unilaterally leave the Episcopal Church. Just because Jack Iker says there is doesn't make it so.
The constitutions and canons of the Episcopal Diocese of Fort Worth -- of which Jack Iker is no longer bishop -- are the ones under which we operate.
Canon 32 is an illegal canon.
Jack Iker has no authority over Episcopalians, their property or their priests.