In memory of her -- Florence Li Tim-Oi

Many years ago the Fort Worth Chapter of the Episcopal Women's Caucus put on a symposium at St. Stephens Presbyterian Church called In Memory of Her. It was at a Presbyterian church because no Episcopal church would allow the Caucus to meet in their building.

The title came from Mark 14:3-9, the story of the woman who anoints Jesus. The last line says, "And truly, I say to you, wherever the gospel is proclaimed in the whole world, what she has done will be told in memory of her."

Of course, despite Jesus' praise of her, we have no idea who this woman was, which is true of so many women in scripture whose names have been left out or lost over time.

The point of the symposium was to talk about some of these unnamed women and to talk about the theological basis for the ordination of women -- a topic that no one ever talked about in the Diocese of Fort Worth. It was the forbidden subject, and those of us who insisted on talking about it were held up to ridicule, scorn and attempts at public shaming by clergy and other leaders in the diocese.

One of the women we walked about at this symposium was Florence Li Tim-Oi, the first priest who was a woman in the Anglican Communion [1944]. Like the woman in scripture, her name and her acts of courage during World War II had been forgotten by most Anglicans -- if they ever heard of her in the first place. 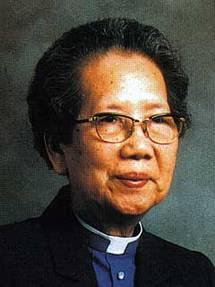 Largely because of the efforts of the national Episcopal Women's Caucus, Li Tim-Oi is now included in the Church Calendar.

Please read it -- in memory of her.

A hundred years ago a baby was about to be born in the fishing village of Aberdeen on Hong Kong island. Its gender was not known. Boy babies were highly prized. At that time, in that culture, a bowl of ash could be at hand to smother unwanted new-born girls. The baby who was born on 5 May 1907 was wanted. Her Christian father, a doctor turned headteacher, valued his new daughter and called her Tim-Oi, “Much Beloved.” That decision began a chain of events which has changed the Church.

Tim-Oi completed her primary schooling at 14, but her five brothers and 2 sisters meant there were no funds for further schooling until she was 21. She left school aged 27. While a student she joined an Anglican church, and at her baptism took the Christian name Florence, because her birth-month, May, is a month of flowers, and because she admired Florence Nightingale.

In 1931 she was at the ordination in Hong Kong cathedral of an English deaconess. The Chinese preacher asked if there was a Chinese girl also willing to sacrifice herself for the Chinese church. She prayed: “God, would you like to send me?” That call never left her. In 1934 she started a four year course at Union Theological College in Canton, where her New Testament tutor was Geoffrey Allen, later to be Bishop of Derby, England. Her family couldn’t afford the college fees which were paid by the Anglican church. While at college she led a team of students rescuing the casualties of Japanese carpet bombing, and narrowly escaped being a casualty herself.

Time does not allow to tell her full story: of her licence to preside for two years at Holy Communion in the absence of a priest in Macau; of the bishop brought up in a Tractarian [High Church] vicarage who was not happy with lay celebration and ordained her a Priest of God on 25 January 1944, because God had clearly shown that He had already given her the gift of priesthood.

After the War, pressured by what I call a “Purple Guard,” to the dismay of the Bishop, she resigned her licence as a Priest, but not her Holy Orders. She was put in charge of a parish near Vietnam, and there she started a large maternity home to ensure that new-born girls were not smothered at birth. Her witness to the value of every child, girl and boy, made many friends for Jesus—making friends for Jesus was her mission in life. But also she showed that “It Takes ONE Woman” to change the culture of her community.

Posted by Katie Sherrod at 1:33 PM