Today I drank my coffee out of a cup he gave me many years ago. He called me his garden girl, and he was so pleased to find this cup that he could hardly wait for a special occasion to give it to me. 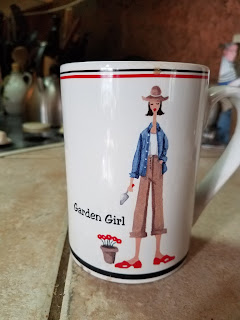 When we got married, he promised me one day of work in the garden every year. When he died 26 years later, he owed me 26 days. . .

Gayland and hot hard sweaty work just didn't exit in the same universe. Now, he WAS lavish with praise of MY work in the garden. He learned early on that it was a really really really really bad idea, when I had spent eight hours on a hot day digging out and planting a new flower bed, to say, when I proudly showed it to him, "Don't you think that bush would look better over there?"

Having a spade thrust into his hand and me saying, "OK, you can move it," and then me stomping off taught him that that probably wasn't the wisest move. 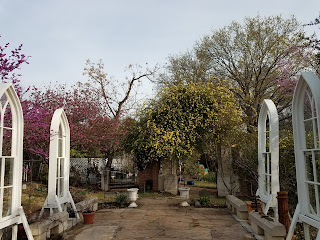 He loved the garden. He loved it year round. He especially enjoyed spring in the garden, when old friends reappeared -- the Lady Banks rose especially -- and new ones were planted. 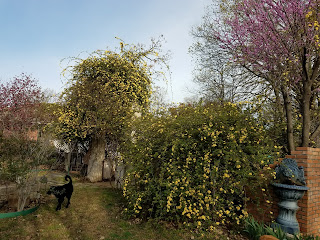 He didn't always know what a plant was, and sometimes when I would call him outside to show him some exciting new growth he would stare at the ground and finally say, "Now what exactly is it I'm supposed to be looking at?"

And I would point to a teensy shoot of green and he would grin and say, "Oh, that's fabulous." And then he would laugh at me and himself. His joy in the garden was all tied up in his love of me and this place, as mine was tied up in my love of him and this place. 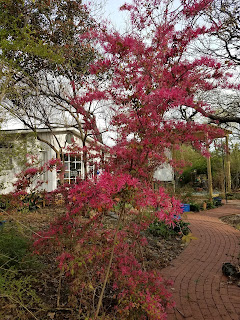 But joy has fled the garden. It is now inhabited by her big sister, sorrow. His absence has made it all meaningless, leached the beauty away, and replaced the peace with grief.

And you know what? The garden doesn't care. It simply goes on, doing what gardens do, no matter whether humans are laughing in it, or weeping.

The absence of this one man, the empty chairs where he sat, the tables on which he put his drink, the empty walks along which he strolled with the dogs each evening before bed -- they are as nothing to the garden.

And, for now, the garden is nothing to me.
Posted by Katie Sherrod at 8:12 PM 2 comments:

Today he has been gone for three months. I woke up knowing this was the anniversary of his death without consciously marking the 11th anywhere but in the cracks of my broken heart. 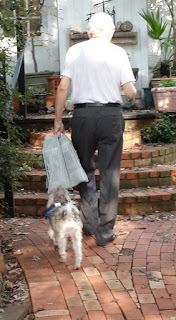 I try hard to avoid the "four months ago he was alive. . ." game because, well, why? But it still sneaks up on me and ambushes me with heartbreaking memories so fresh and real they could be movies projected on a screen. I come across a photograph, or a note he scribbled to himself and stuck in the tray of his car, or a list he made -- oh, how he loved lists, convinced that with a list he would be organized and invincible against his ADD. But, of course, he always forgot where he put the list . . .

Even sleep is an enemy, because, well, dreams. Dreams have become faithless purveyors of vivid images of him laughing, talking, walking in the garden with me, holding me, images so real that I wake up smiling, only to crash into lonely reality.

Grief seems to have taken up residence in my throat. I can't sing. I can't even pray out loud. Doing any of these things can cause me to dissolve into tears. Sometimes I can't even talk.

Music especially is difficult, which is simply mean, because I love music, as he did. We often had classical music playing in the house. But now one of his favorites comes along, and I can't bear it.

But he would hate it that I might go without music, and so I listen to it while moving through a world blurred by tears, or holding a dog who doesn't mind having damp fur on her back.

But the big dog, Booker, can't bear it when I cry. In his distress he climbs up on me, trying to cram all 60 plus pounds of him onto my lap. He doesn't lick, as the others dogs do. No, he gently prods me with his muzzle and rests his head on my chest, wrapping a leg around my shoulder. And then just holds on. As I do.

Booker and me, just holding on.
Posted by Katie Sherrod at 8:07 PM 2 comments:

Some of the echoes of him are fading, no matter what I do.

He was the grocery shopper in the family, delighting in meeting his friends in the store, checking up on the checkers, bargaining with the butcher, laughing with the stock boys and girls. He knew them all, and loved them.

But today, I opened the last of the bath soap he bought. Yesterday I used up the last bit of coffee he had stockpiled. On Sunday I realized we -- I -- am out of salt. And vodka. Oh, my, he would have hated for me to be out of vodka.

Silly, isn't it, to grieve over such things.

But such things reduce me to tears, and I have to stop and just breathe for awhile.

I watch an episode of a TV series we were watching together, and I start to cry. I watch the final episode of Victoria and weep because he's not here as my personal historian to discuss the accuracy of the story. I finish reading a book we had talked about and automatically think, "I have to talk to him about this ending . . ." I am out at a late meeting and start to text him that I'm headed home, and realize there is no one at home worrying about where I am.

A hundred times a day I think, "I have to tell Gayland . . ." and then stop. I plant some new shrubs and flowers in front of the guesthouse and my first thought is to call him to come look at how pretty they are. I think about doing something new in the garden only to be hit in the face by the knowledge that my dearest co-creator is no longer here. And all the joy in the garden drains away.

People ask, "How are you?' And I say, "I'm here."  Because that's all I can manage right now. Showing up. Putting one foot in front of the other. Moving from hour to hour, project to project. Alone.

Yes, this is me, weeping over bath soap, and mourning the last of the salt.
Posted by Katie Sherrod at 9:14 PM 1 comment: