A vacation gift from my valentine

Last year, when Gayland began failing, I kept getting phone calls from Westin Resorts, saying they needed to talk with me about my Westin vacation.  It sounded like a sales call, so I would just say, "I don't have time for this now," and hang up.

This went on for months. Gayland got sicker, and then he died, and my world just shut down to trying to make it from one day to the next. But these calls from Westin kept coming.

Until finally, on Valentine's Day, I said, "What is it you want?" And the woman told me that in the spring of 2017 Gayland had bought and paid for a 5-night, 6-day stay at a Westin Resort on Maui for two adults and two children under 18 and I needed to schedule it before the time ran out.

In a daze I listened to her explain that it came with a rental car and a $75 voucher for use on the resort and I needed to schedule my stay soon. I explained to her what had happened, and she immediately extended the deadline until September. After the shock wore off, I consulted with my daughter and we selected a date.

So on July 16, my daughter, my two grandsons, and I flew to Maui, courtesy of Gayland's Valentine's Day gift. 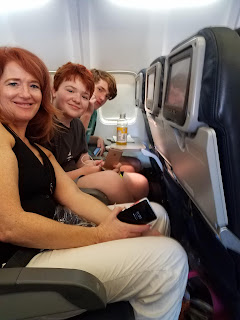 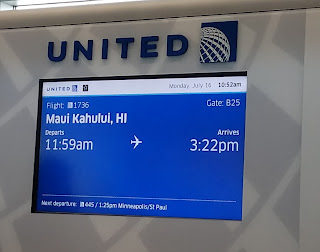 It was wonderful. It was heartbreaking.

He and I had stayed on Maui twice, most recently five years ago.  Almost every day, he would say, "We have to bring the boys here." And I would agree. He was especially pleased to find a cafe in Lahaina called Da Kitchen, which he decided was Da's Kitchen (the boys call him Da). 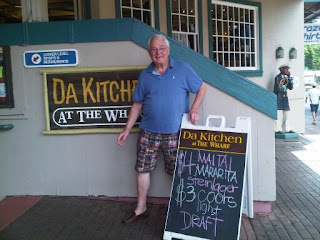 When the plane took off I was almost overwhelmed with the sense of loss. His absence was so huge I could hardly breathe. He would have so loved to be there with us. He loved swimming in the ocean and he and the boys would have become waterlogged together. He would have snorkled endlessly with them. He would have loved watching them at the aquarium and urging them to try new foods. He would have loved their reaction to the volcano, to seeing all the new variety of birds and plants and all the colors the ocean can be from one minute to the next. 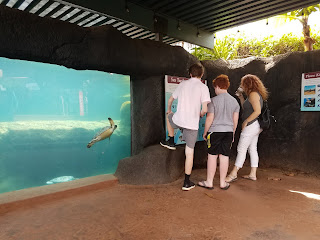 So I know he was smiling at their antics in the ocean and loving their having this time in a beautiful place. We came home full of new shared adventures and experiences. 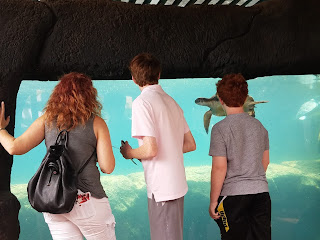 They did love it, my darling, just as you knew they would. But it would have been so much better with you along.
Posted by Katie Sherrod at 5:03 PM 4 comments:

What is heaven worth without dogs?

When you've lived with someone for 26 years, there is a lot of stuff involved -- and a lot of photos stuck here and there.

So yesterday, as I was cleaning, doing laundry,  and trying to get ready for General Convention in Austin, I happened to open a drawer in Gayland's bedside table.

And there was this photo. 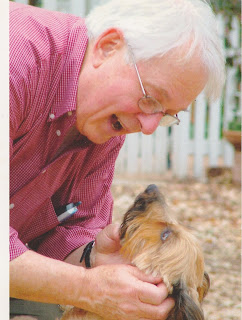 This is Gayland with his beloved dog Esau. I am convinced it is a photo of their reunion in heaven.

Esau was a foundling, like all our dogs. Gayland found him lost and wandering on Meadowbrook Drive and brought him home. He left me a cryptic voice message that said, "The little hairy man and I are home, waiting for you." So I arrived home from Channel 13, where I was working at the time, full of curiosity.  And fell in love with Esau.

Esau was indeed a little hairy man. He was -- it turned out -- a loose coated wire-haired dachshund. Who  knew that was a thing?

But what a precious thing. He and Gayland bonded at once. Gayland had never had a dog that was just his. They had had family dogs, but Esau was totally HIS. They adored each other. Oh, Esau loved me too, but it was clear I was a distant second to Gayland.

In 2012, while we were on a trip to Sicily, someone left a gate open, and Esau and another dog got out and were killed by a car. Another of our dogs was badly injured. We came home to this news, and we were devastated, Gayland especially so. The loss of Esau was huge.

A few months later, we got two more wire-haired puppies who had gone soft coated, and we loved Ms. Wiggles and Toby, but they weren't Esau. I don't think Gayland ever really got over that loss.

So I look at this photo, and I smile. I know Esau was waiting for Gayland and greeted him with squeals of joy and wiggles of delight. Rusty was there too, and Molly and all our other beloved dogs who went on ahead.

Of course they were.  For what is heaven worth without dogs?
Posted by Katie Sherrod at 8:33 PM 2 comments: