We are not a Christian nation. We're not even very Christian.

The United States is not now, and never has been, a "Christian nation."  This is a good thing.

We are a secular nation, not a theocracy. This is a really good thing.

But if we ever needed proof that the people who make the loudest claims that we are a Christian nation aren't very Christian themselves, we are seeing it right now. 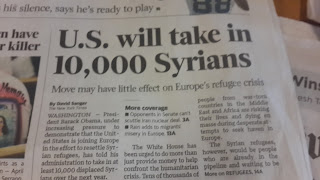 Today, this headline appeared in newspapers and in news broadcasts nation wide.

Unless you've been in a cave, you must be aware of the refugees flooding into Europe as they flee the violence in Syria. You may have even wept over the heartbreaking photo of Aylan Kurdi, the  three-year-old child who was swept out of his father's arms and drowned. There are hundreds of thousands of children, women, and men in desperate need of succor.

And yet we, the richest nation in the world, decides to take in only 10,000 refugees? We should be ashamed of ourselves.

But where is the outcry of protest from the right wing Christian extremists that it's not near enough?

Why are no Republican presidential candidates calling for a protest march on Washington? Why is there no House or Senate committee calling for an investigation of why we aren't taking in hundred of thousands of refugees?

Why isn't Kim Davis using her new found fame as a Christian martyr to join with Mike Huckabee and Ted Cruz to demand more aid for these refugees, clearly the "least among us"?

I ask because if there is one thing the bible is VERY clear about, it's God's call to welcome the stranger. It's even in Leviticus -- the only book of the Bible many of these folks appear to have read.

Leviticus 19:34 says The alien who resides with you shall be to you as the citizen among you; you shall love the alien as yourself, for you were aliens in the land of Egypt: I am the Lord your God.

There is no mincing of words here. This is very clear. But Leviticus isn't the only place where Christians are commanded to welcome the stranger -- it's in several places in both the Hebrew and Christian scriptures:

And yet, there is no outcry.

And here's the bible verse that comes to mind as I watch and listen to them:

The "judge not lest you be judged" thingie

I am a Christian and I am sick to death of people using their "Christian" faith as a weapon of mass discrimination. People of all faiths are welcome to worship and live out their faith as they please, but they are not entitled to impose their religious beliefs on others -- not even recently famous would-be Christian martyr County Clerk Kim Davis.

Apparently Davis is fairly new to Christianity and apparently she is involved in an evangelical branch of the faith, which tends to be heavy on biblical literalism and light on theological study.

What disturbs me is that she clearly is being taught a Christianity based in fear, not love. Hence her overwrought claim that the act of issuing a marriage license to same-sex couples would endanger her immortal soul. She overlooks the whole "judge not lest you be judged" thingie.

Are you following this so far?

According to her attorneys, her divorces and remarriages happened before she became a Christian, and now all those past mistakes are forgiven and thus not relevant. But Jesus doesn't offer "get out of jail free" cards.

Being forgiven doesn't mean there are no consequences for one's behavior. Some measure of humility is called for, not smugness. Self-examination is good. Examination of the faults of others, not so much.

Jesus' forgiveness doesn't come with a license to judge others. In fact, Jesus is pretty clear about who gets to judge others, and it ain't Kim Davis. Just read Matthew 7:

7 “Do not judge, or you too will be judged. 2 For in the same way you judge others, you will be judged, and with the measure you use, it will be measured to you.

And there's that inconvenient thing Jesus says about looking at the speck in your brother's eye while ignoring the log in your own.
Still, while I think she should either do her job or resign, I also feel compassion for her. The faith that should be bringing her peace is instead clearly terrorizing her. Hence her talk of this being a "life or death matter."

See, here's the thing. God loves us all. No exceptions.

The Jesus you follow said that the two great commandments are to love God and to love your neighbor as yourself. In these two commandments lie all the law and the prophets.

Because God also loves those same-sex couples who are coming to your office seeking to get a license that will allow them to seal their commitment and mutual love in a marriage.

God IS love. Jesus taught that, again and again. So do not be afraid. It's not all on your shoulders.

God loves who God will love. You aren't on God's selection committee.

Indeed, you're supposed to be part of the welcoming committee.
Posted by Katie Sherrod at 1:01 PM 1 comment: