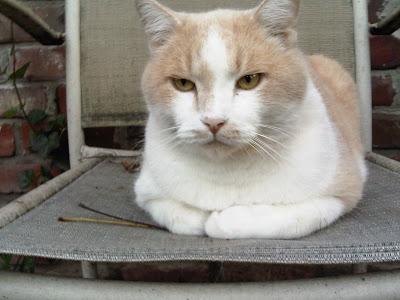 I have asked my Chief of Staff to assist me in preparing this, ah, report. 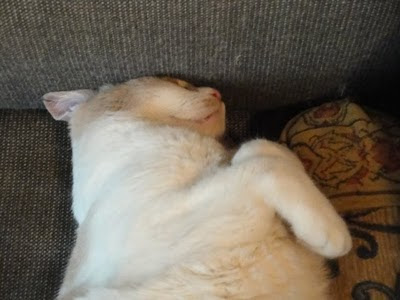 It is a meditation on sleep, something humans beings seem to take much too lightly. But then, you are not Cats, are you?

"Sleep that knits up the ravelled sleave of care. The death of each day's life, sore labour's bath. Balm of hurt minds, great nature's second course, Chief nourisher in life's feast." -- Macbeth, Cat who allowed William Shakespeare to live with him and to use his name as the title of a "play." 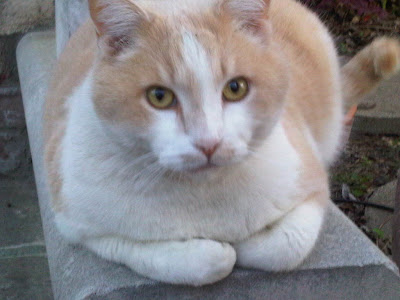 If Cats are anything, we are professionals at sleeping. Our keen minds and highly honed bodies require, oh, about 20 hours of sleep a day.

"Life is too short to sleep on low thread-count
sheets." -- Prissy, the cat who allows Leah Stussy to
live with her. 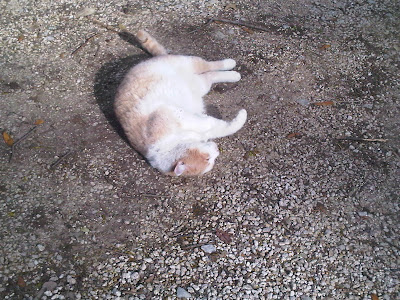 We are such professionals that we can sleep in the most insalubrious of situations. Why, here I am shown sleeping in the driveway. This makes my Chief of Staff very nervous and she scolds me for it constantly. But of course I am always careful to sleep out of the way of the Big Moving Machines she and her assistant use. I am not an idiot. 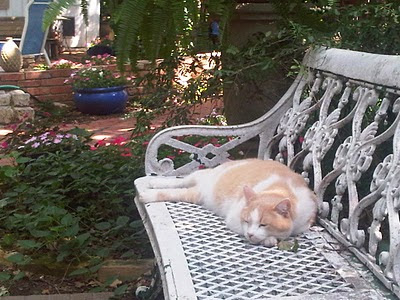 But most of the time I sleep in one the many lovely places my Chief of Staff has prepared for me around my garden. She has nicely placed them in shady spots where I can doze while also keeping an ear turned to her whereabouts in the garden or the house. If she goes anywhere NEAR the cupboard where my treats are stored, I know it. 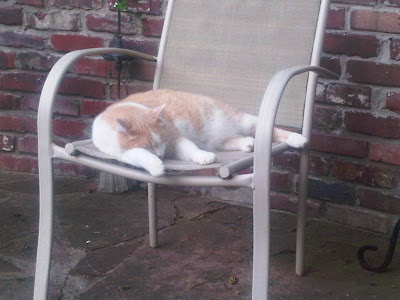 This chair is in the Chapel Garden. I often doze there in the early evenings while my Chief of Staff and her assistant have "drinks" in the garden. Why they don't just drink out of one of the fountains like I do is one of the mysteries of my life.

"And if tonight my soul may find her peace in sleep, and sink in good oblivion, and in the morning wake like a new-opened flower then I have been dipped again in God, and new-created." -- Sheik, Cat who allowed D.H. Lawrence to live with him. 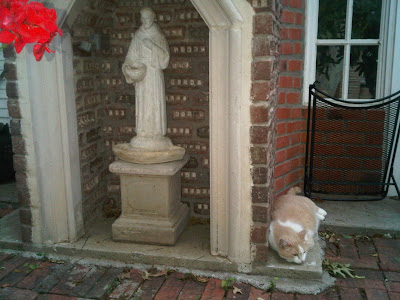 Here I am dozing next to one of the statues of St. Francis, one of the rare human beings who really understood what God was doing when She created the animals first, THEN the humans. 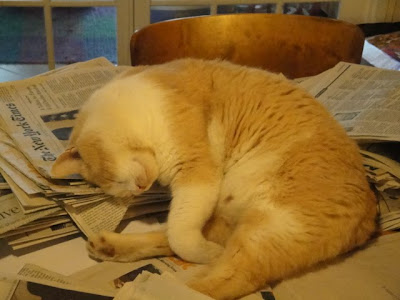 Here I am sleeping while keeping one ear on my Chief of Staff as she reads the newspapers, things human beings need to keep them informed about what is happening in their world. Cats, of course, need only their noses and their ears to know what is going on their THEIR world.

"There is no snooze button on a cat who wants breakfast." -- Cat owned by some really smart but anonymous human. 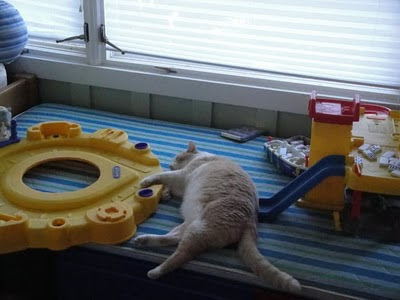 Cats can sleep anywhere, even amidst the toys that the human kittens my Chief of Staff adores insist on strewing about MY room in the house. I allow these two kittens to believe my room is their room.

"Without enough sleep, we all become tall two-year-olds." -- Bijou, Cat who allowed JoJo Jensen to live with him. 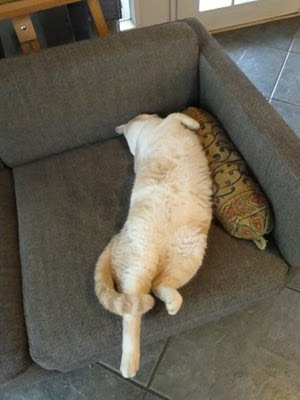 We Cats are masters at total relaxation, something humans seem to need "wine" or "drinks" to accomplish. Pity. 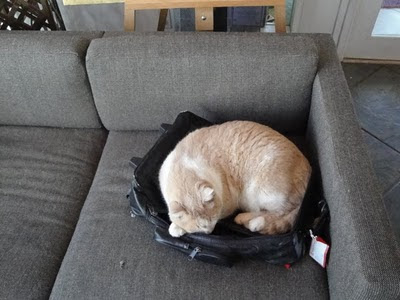 Sometimes I also guard my Chief of Staff's computer case when I sleep. 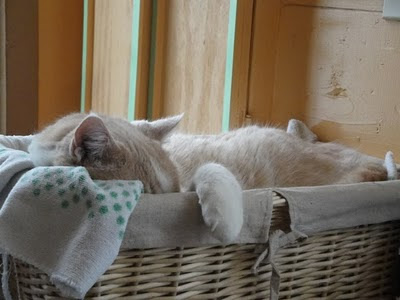 My Chief of Staff has prepared a basket for me that she calls "my" basket. It is one of the MANY places I sleep.

"O bed! O bed! delicious bed!That heaven upon earth to the weary head."-- Cissy, Cat who allowed Thomas Hood to live with her. 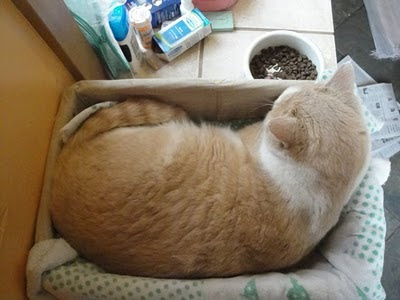 She has made the basket quite comfortable, and it is exactly the right size. 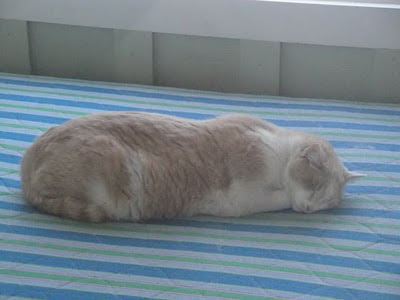 I also sleep in the "the boys" bed, although in reality it is MY bed. I graciously let the "grandchildren" think it is theirs. 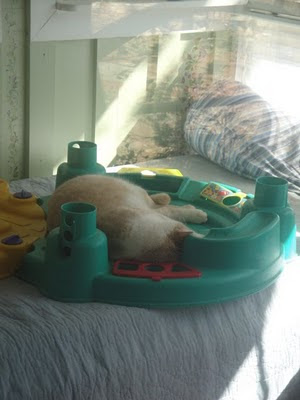 See what I mean about the toys? 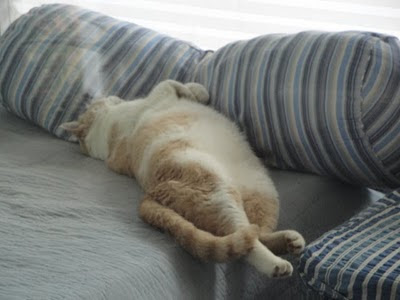 Sometimes I am so relaxed my Chief of Staff thinks I am about to fall off the bed. Silly thing. Cats never fall off beds. 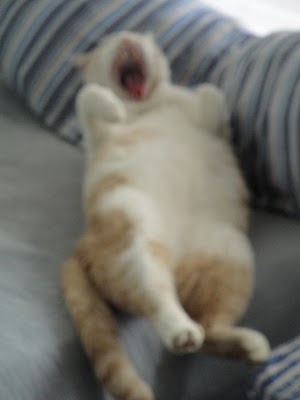 Oh, all this dictation is exhausting. I need a nap.

"There is no hope for a civilization which starts each day to the sound of an alarm clock." Cat who was owned by an anonymous human.

Another of Bruce's sermons

A Sermon on Ascension Sunday
Preached at All Saints’, Wichita Falls, Texas
May 16, 2010