In my post "Who is in the room matters" I wrote that the HOB "received" the report of the theology committee on same sex marriage.

That was not correct.

They didn't even "receive" it. It was "presented" to them. I've been told that the bishops were so underwhelmed by the report[s] that there was a long discussion of what word to even use to describe what happened.

Now that the report has been published for all of us to read here many people have begun to comment on it. One of the best I've seen is posted at Friends of Jake entitled "I won't lecture you on theology if you won't lecture me on science."

Episcopal Cafe is gathering and posting comments as well. So go read it and let us know what you think about all this.

Elizabeth Kaeton has posted her thoughts on Bishop Lambert's comments and demonstrates that he is not alone among bishops in not wanting inconvenient people in the room where decisions are being are made.

Read and enjoy. And please say a prayer for my grandson Curran, who is 8 years old today. He and his brother Gavin are my heart's delight. May he continue to grow in grace and knowledge of God.
Posted by Katie Sherrod at 10:58 AM No comments:

Who is in the room matters

At their just-concluded meeting, the House of Bishops "received" the two reports from the no-longer-secret-committee of theologians about same sex marriage.

Mary Glasspool, bishop suffragan elect of the Diocese of Los Angeles, attended this meeting at Camp Allen near Houston as did Bishop Gene Robinson. For non-Episcopalian readers of this blog, Glasspool is a fine priest and a lesbian living in a long-term committed relationship. Bishop Robinson is a great bishop, and a gay man living in a long-term committed relationship.

Episcopal News Service has a story in which reference in made to a comment by Paul Lambert, bishop suffragan of Dallas, in a posting to the Anglicans United website. I found it revealing and informative.

Here is the statement [emphasis added]:

"It goes without saying that the recent Consent for the Bishop Suffragan of the Diocese of Los Angeles has been a topic of discussion among the gathered bishops and how that will impact our relationships with the larger Communion. Although we have not had a plenary discussion on this development we will no doubt do so when the subject of the Anglican Covenant later this week occurs. Of course, her presence at our meeting makes it difficult to discuss this openly and honestly, both for her and the House gathered. I bid your prayers that we may have a spirit of mutual respect and forbearance for all involved. I do believe that we will do so with sensitivity and concern for all."

One might ask, how does the presence of Mary Glasspool make it difficult for bishops to discuss how her election will impact our relationships with the larger Communion openly and honestly?

Would the bishops say things behind her back that they would not say to her face? Apparently so.

It is indeed harder to talk about another human being as an "issue" or a "problem" when he or she is in the room looking you in the face. It is even harder when they are worshipping next to you, taking communion beside you, sharing the Body of Christ.

It is the power of the incarnational experience, and it is exactly why some have fought so hard and long to keep people of color, women and LGBT people out of the rooms where power is wielded and decisions are being made that affect the lives of people of color, women and LGBT people. It is why some primates, bishops, and other individuals have refused to worship with our presiding bishop and have loudly demanded she not be allowed to come to meetings of the primates.

It is why the Archbishop of Canterbury declined to invite Gene Robinson to Lambeth.

Yes, it makes it harder for those who have been accustomed to wielding power unchallenged for so long to continue to speak and act as if all these millions of people are somehow "less than" other people.

Yes, this means that when you say LGBT people are "intrinsically disordered" you are going to have to say it to their faces -- and then -- harder still -- listen to their response. You might even have to witness the deep wounds your words and actions have caused and are causing all these people.

But given that we are brothers and sisters in Christ, this new reality in our House of Bishops should be an occasion of rejoicing, not lament. Our bishops are beginning to experience what the House of Deputies began to experience long ago -- who is in the room matters.

Bishop Lambert obviously realizes this, as he writes, "I bid your prayers that we may have a spirit of mutual respect and forbearance for all involved. I do believe that we will do so with sensitivity and concern for all."

I join him in this prayer.
Posted by Katie Sherrod at 11:08 AM 5 comments:

Friday I was among several women who were honored as a "Veteran Feminist of Texas" by the VFA of America at the Women's Museum in Dallas.

While there, I treated myself to a red T-shirt with one of my favorite sayings. It is a quote from the writer Laurel Thatcher Ulrich -- "Well behaved women rarely make history."

I was literally holding that shirt on Saturday when my husband walked in and said, 'Liz Carpenter died." 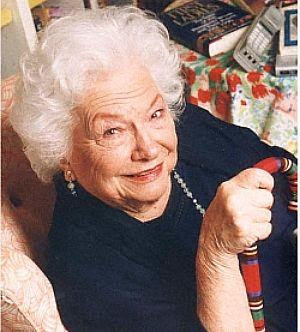 I hugged the shirt to my chest and cried. And then I had to laugh, thinking of Barbara Jordan, Molly Ivins and Ann Richards greeting Liz with big hugs and cries of "Well, I guess they'll let just anyone in here!"

Heaven is a lot more fun this week than it was last week. But what a loss for us all.

Liz Carpenter was the incarnation of Ulrich's saying. Killer smart, bawdy, irreverent, kind-hearted, generous and feminist to the core of her being, Liz Carpenter never DID behave the way society thought "good girls" are supposed to behave. And she taught at least two generations of Texas women how to do the same.

One of the prime evenings of my life was when a group of us from Leadership Texas found ourselves sitting around at Liz' house with Barbara Jordan, Ann Richards and other amazing Texas women. I remember thinking, "Thank you, God, for letting me live to be in this room."

I laughed so much that night my stomach muscles were sore for days afterward. Barbara Jordan taught us all how to sing Gospel songs right and Ann and Liz tried to top one another with one-liners. We were almost too weak to walk when it came time to leave -- a common affliction of anyone who spent much time around Liz and Ann.

Liz' most common greeting upon meeting new people was not "Hello," it was, "Do you support the ERA?"

She was never afraid of that second "F" word -- "feminist" -- and it grieved and puzzled her that so many younger women are so comfortable using the first "F" word and so uncomfortable naming themselves as feminists.

Her battles for women's rights began as a young reporter trying to get equal access with male reporters to the halls of power. She credited Eleanor Roosevelt with breaking down barriers for women reporters, because Roosevelt would allow only women to come to her press conferences, forcing many newspapers to scramble to hire women.

Another Texas politician -- and a friend of Liz Carpenter - did the same thing for women reporters of my generation. When Sissy Farenthold ran for governor of Texas in 1972 [she ran again in 1974], she was largely ignored by the Texas press. The only reporters who covered her at all were women working in "women's sections," having been denied jobs in the main newsrooms of the large Texas dailies.

Then suddenly it looked liked Farenthold might actually win the Democratic Primary, which in those days meant she would win the General Election. The newspapers sprang into action, trying to get interviews with her. She would agree, but only if they sent one of the woman reporters who had already been covering her. I was one of those reporters.

Her support meant women reporters all over Texas were found suddenly to be capable of doing "real" reporting by their editors. Dozens of us were finally allowed to do political reporting, a job formerly reserved for male reporters as it was thought to be too tough and rough for a woman to cover.

Sissy's act of solidarity was cheered on lustily by Liz, who was constantly exhorting us to keep a toe stuck in the doors we had pried open so women coming after us would have an easier way in.

It is that sense of sisterly solidarity that Liz worried younger women are losing. She worried that if they don't understand how hard fought were the battles to get them into the rooms of power, how could they be expected to stay vigilant on behalf of other women? She worried that our daughters would have to fight all the same battles again and again.

Liz understood power. Hell, she worked with LBJ, the politician who understood power better than anyone -- and Liz would regularly face LBJ down in arguments. She would go head to head with him, giving as good as she got. He adored her.

Liz understood that power is a neutral thing that can be used for good or for ill. She understood that reserving power into the hands of less than half the population is not healthy for any people or nation. She knew that any nation that refuses to use the resources that reside in its women and girls will never thrive.

In her early 70s she took on the raising of the three youngest children of her brother Tom Sutherland, who had died of cancer. When the mother of the children, who ranged from 11 to 16, and their older siblings were unable to look after them, Liz took charge.

Her 1994 book “Unplanned Parenthood: The Confessions of a Seventy-something Surrogate Mother,” is a hilarious and deeply touching account of that time in her life. But the things she learned from those teenagers honed her insights and kept her keenly attuned to changes in our our culture.

Liz never "retired." She was engaged down to her toes every minute of her life.

I know we are supposed to say, "rest in peace," but I think that would bore Liz to tears. So I'll just say, "Give them all my love when you see them."

I am going to miss her for a long long time.
Posted by Katie Sherrod at 10:30 AM 2 comments: