The engine's runnin' but ain't nobody drivin'.

Below is a letter from Jack Iker to the Presiding Bishop. If ever there was any doubt that Jack Iker and his followers are delusional, this letter removes it.

If you can't read the letter below, you can find it here. Or click on the letter. When a friend first read it to me over the phone, I thought it was a joke someone had posted on the 'net, a parody of a letter.

But no, as near as I can discern, it's for real, although it reads like something written by someone channeling Lewis Carroll. 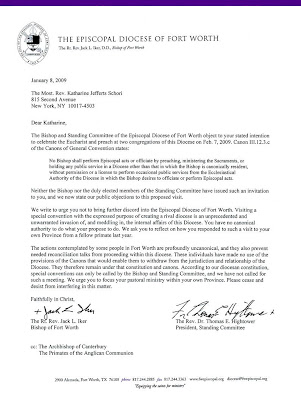 It's almost not fair to respond to this, because it is such a slow moving target.

First of all, Jack Iker is no longer the bishop of the Episcopal Diocese of Fort Worth. He AND the Standing Committee all very publicly left the Episcopal Church. So it does not matter one teeny bitty bit bit that they haven't invited the presiding bishop here.

It's like a neighbor of mine used to say, "If you get to thinkin' you're a person of some influence, try orderin' somebody else's dog around."

Jack Iker is no longer a person of some influence.

He and the former members of the Standing Committee have no authority over Episcopalians OR their dogs any more. This letter is one more meaningless act by irrelevant people who apparently aren't sure exactly what church they are members of.

As to the claim of a "rival" diocese being created, let me say this one more time, very slowly.

We are not creating a "new" or a "rival" diocese. We ARE the diocese. You left. We did not.

Then there is the whole paragraph taking Bishop Katharine to task for an uncanonical invasion of "his" diocese and asking her to "reflect" on how she responded "to such a visit to your own Province from a fellow last year." That would be Gregory Venables' visit to Fort Worth.

Does Iker not realize that in characterizing Venables' visit last year as "such a visit to your own Province from a fellow primate last year," he is admitting that Venables' visit was uncanonical? That he and Venables, unlike the Episcopal Church, conspired to violate one of the sacred Windsor Report recommendation?

No, he does not, because as my friend Mollie Ivins once famously said of George W. Bush, if you put his brain in a bee, it would fly backwards.

Now he is accurate that "Actions contemplated by some people in Fort Worth are profoundly uncanonical," but those "some people" would be Iker and the former members of the Standing Committee.

I mean, Iker even violates the illegal canons he and his followers came up with in their effort to make their illegal actions appear legal. His own specially crafted Canon 32 sets in place a process that is to be initiated by petition from a rector and the vestry.

Instead, Iker himself is invoking "Canon 32" proceedings against All Saints and St.Christopher, just as he did Christ the King. They are, of course, ignoring him, as they would any letter from a delusional crank.

He then laments that these uncanonical actions "prevent needed reconciliation talks from proceeding within this diocese."

Reconciliation?!? I know of no parish or individual who has gotten a letter seeking reconciliation or even mediation. Instead he fulminates and threatens, as bullies always do.

And don't you just love it that he copied the other Primates and the Archbishop of Canterbury? Could it be any more embarrassing?

Cowboys in West Texas have a saying about things like this -- the engine's runnin' but ain't nobody drivin'.

Posted by Katie Sherrod at 8:58 PM

I love the "order someone else's dog around" metaphor.

Katie
i know i'm repeating myself, but what a gift you are- not only to your diocese, but to the larger church- keeping us posted for what's going on in Fort Worth

shouldn't someone start checking out psychiatric facilities for accomodation for two delusional individuals by the name of Iker and Hgihtower? wouldn't be too much of a stretch to assess them as a public danger from all that i'm seeing

Mama always said if you can't say something nice about someone, don't say anything at all. So here goes.

The man is not very smart, is he? Bless his heart.

St Christopher's is staying? Good - I have many happy memories of that place.

Well, bless their hearts, those boys are just all ate up with dumb, ain't they?

The word verification is 'tumfu'.

I believe the stress is finally starting to get the best of Mr. Iker. If he thinks for a moment that he can order real Episcopalians around just because he pretends to be the "Bishop of Ft. Worth", he is sadly mistaken.

The ex-bishop must be delusional to think +KJS would place any stock in a letter that is clearly nothing more than his usual deceitful diatribe.

Katie You write like our gear Molly. We appreciate you Tom Wilson PS I like mark Harris designation IDFW ( Iker Diocese Fort Worth

This letter means that dear Jack has finally wised up to the fact that his recent actions - and that if his buddies - for the first time actually allow Presiding Bishop Katharine to come to Fort Worth to celebrate the Eucharist.

Ooops! Sorry. But Jack & Co. can't have it both ways. They could have stayed in The Episcopal Church and kept women priests out of Fort Worth. Instead he and the others chose to leave, and now they see what that means in practical terms.

I assumed Jack & Co. had all of this well thought out in advance. Apparently not.