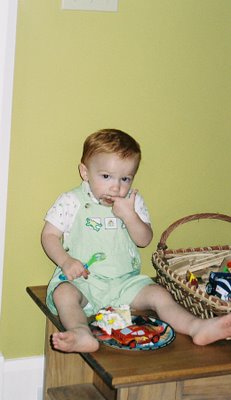 Gavin on his 2nd birthday. 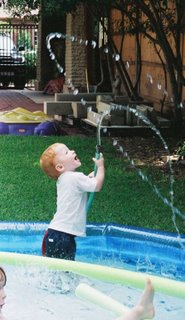 Posted by Katie Sherrod at 7:55 PM No comments:

There may be no better way to spend a lazy Texas-hot summer afternoon than going to see a movie in a frigidly air conditioned theater.
It’s even better when your 4-year-old grandson goes with you.
We saw Cars.
Curran loves all things with wheels these days, and I’ve loved cars all my life, so this was the perfect movie for the two of us. Once again, Pixar Studios works its magic. The story of the redemption of racecar Lighting McQueen is enchanting, funny, poignant, and just exactly silly enough. Anyone who has ever sworn her car has a personality will love this movie. Anyone who has ever sworn AT his car will love this movie.
I think a love of cars is in my genes.
My paternal grandfather loved cars. When he was flush he owned big expensive cars and bought them for his sons when they went to college.
My father loved exotic cars all his life. He raced sports cars in amateur road races put on by the Sports Car Club of America. At various times he owned Jaguars, an Aston Martin and that pinnacle of every car lover’s dream -- a Ferrari. It was red, of course.
He infected all four of his children with this love of cars. When we are all together, the talk inevitably turns to talk of cars. More exactly, we talk of driving cars.
There is something sleekly satisfying about driving a splendid machine that does what it was made to do very very well. I will never forget driving my dad’s Ferrari on a deserted stretch of a long straight West Texas highway that allowed me to reach a speed I will not divulge, but which caused the telephone poles outside to flash by so fast they disappeared. Inside the car, however, everything was smooth, calm and quiet. This car was simply doing what it was made to do.
My father taught us all the importance of driving well and driving safely. He also taught us to care for our cars, however mundane or exotic they might be. He was able to afford expensive cars, but he loved driving almost any car that ran well. It was the experience he loved, I think.
Since people in West Texas have to drive long distances to get just about everywhere, I guess it was a good thing he loved to drive. In the early days of his medical practice, he had to drive 60 miles one way to the nearest hospital. He and my mom thought nothing of driving more than 300 miles to El Paso for a party, only to come back the next day.
One of my nicest memories of childhood is of sitting in back seat while my parents drove for hours through the night, my little brother sleeping beside me. My parents’ voices drifted back to me as I gazed out the window at the dark landscape and the bright night sky.
The moon often was so brilliant that the mesquite trees threw gnarly moon shadows on the road. In that sparsely populated part of West Texas, the stars were so bright they could hold their own even against a full moon. I would gaze at them and make up stories until I got lost between waking dreams and sleeping dreams.
And always, there was this otherworldly sense of being safely contained in this car moving across a sleeping land, our small band of travelers heading somewhere in another time, another place, another life. Anything was possible.
And I think that’s why I love cars. They embody for me the possibility of adventure. Within them is contained the potential for heading out to somewhere new, somewhere wonderful.
All you have to do is get in, and drive.
Posted by Katie Sherrod at 6:02 PM 1 comment:

Feeding on the Bread of Anxiety

At the end of the General Convention of the Episcopal Church, it came down to this:
We tried to create a “diverse center” by throwing aside the dignity and ministries of lesbian, gay, bisexual and transgendered sisters and brothers.
We tried to build a bridge to Lambeth on the bodies of LGBT Episcopalians.
We tried to “create space for healing” by throwing some of our brothers and sisters out of the boat.
We tried to become “Windsor compliant” instead of focusing on being Gospel compliant.
And all of this because we were force fed the bread of anxiety and became agents of fear instead of agents of hope. There was way too much talk of “sacrifice” and “crucifixion” and none at all about resurrection.
From Day One, a small number of noisy conservatives were pumping fear into the Convention as hard as they could. English archbishops were flown in from England to add to the pressure. When the British bishops weren’t there in person, they were issuing letters of warning, which were quickly passed around by the conservative minority.
It almost didn’t work. This Convention was very clear that it did not want to go back on human sexuality justice issues. Finally on the last day the presiding bishop used the ugliest kind of coercion and distortion of process to get what he wanted and thought he needed.
In his address to the joint session of the House of Bishops and the House of Deputies, Frank Griswold tried to anger “the center” by telling them that “the fringes” had manipulated them. He made it clear that the “fringes” included LGBT people who are participating fully in the life and ministry of the church and want to continue to do so.
We-have-to-do-this-or-we-won’t-be-invited-to-Lambeth became his ultimatum. Then he brought out his biggest gun of all, Presiding Bishop-elect Katharine Jefferts Schori. Give Katharine what she needs to be at the table was the plea. The bishops caved.
And when Jefferts Schori was invited to speak to the House of Deputies, the deputies caved.
Fear triumphed over hope, appeasement trumped truth, bullying replaced leadership.
It was spiritual violence – to my LGBT sisters and brothers, to the bishops, to the deputies.
And all for what?
Within minutes, conservative Episcopalians were saying it wasn’t enough. To their credit, they had also said this on the floor of the House of Bishops and the House of Deputies. All along, they’ve said it wasn’t enough. In fact, nothing the General Convention could have done short of stripping Gene Robinson of his office, throwing him and all LGBT people back into the closet and locking the door, and then handing the leadership of the church over to Peter Akinola assisted by Bob Duncan would have satisfied them.
Why are we surprised? Appeasing bullies never works.
We had a chance to say, “We in the Episcopal Church value being part of the Anglican Communion. We love it and wish to remain a vital part of it. However, we are not of one mind on the issues presented in the Windsor Report. We are working out our own consensus on this. Please give us grace and time in which to work this out in the context of our polity. And then let us bring our lived experience in dealing with these painful issues to the Communion as our gift.”
That would have been the truth.
It would have shown respect for the Anglican Communion and for the decisions the bulk of people in this church support. It would have shown respect to the shrinking number of conservatives who are in pain over the direction of The Episcopal Church and it would have shown respect for LGBT people and their allies.
If Katharine Jefferts Schori walks across that bridge to Lambeth, I pray that she will say this to the rest of the Communion.
The Episcopal Church’s struggle to extend the life of the church to all the baptized is a gift.
Let us celebrate that struggle, work to live into it, and give witness to it in the larger Anglican Communion.
Posted by Katie Sherrod at 6:17 PM 4 comments: