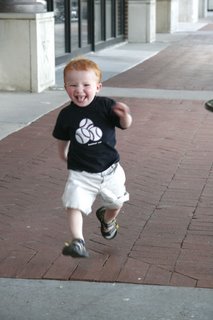 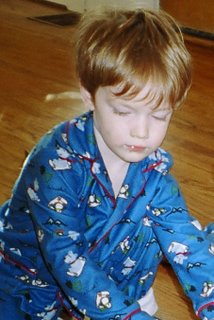 I am the only girl in a family of four children. My three brothers and I — to our consternation and amusement -- still occasionally play out disputes that arose in our childhood. That has made watching my two grandsons negotiate the shoals of siblinghood very interesting. I keep wondering which of their disputes will reappear in their adulthood.
Curran was two and a half when his little brother was born. He was pretty thrilled about the baby finally arriving, because he had talked to Gavin through his mommy’s belly button for months.
But he was a little shocked to find that Gavin was coming home from the hospital with Mommy, and, indeed, was going to live with them.
When we all arrived at their home from the hospital, I watched Curran walk all through the house, looking worried.
‘What’s wrong?” I asked.
“Well, Gramommy, we don’t have a bedroom for Gavin. He’s just going to have to sleep on the porch.”
So his mommy explained that Gavin was going to sleep in the same room as Curran, in the crib that he, Curran, had left when he moved into his “big boy” bed several months before.
“Remember? The crib is a baby bed, and Gavin is a baby,” his mommy said.
Curran agreed that that would work, and he volunteered to watch over his baby brother and “keep him safe.” Then he pinched Gavin to wake him up so he could tell him that.
Gavin is now two. Their relationship, like that of most siblings, alternates between heartwarming sweetness and outright violence.
Once when a teething Gavin was fussing and very unhappy, Curran offered him his [Curran’s] beloved blue blanket. Talk about a gift of love! Curran’s “bu bankie” is his beloved refuge, his comfort when he’s upset, his security as he sleeps. His mother has to time the laundering of the “bu bankie” very carefully indeed. So his offering it to his unhappy baby brother made all the observing adults tear up a bit.
Gavin was an early talker. Before he was two, he had mastered the phrases necessary to any little brother, as in ‘Mine!” and “No!’ and ‘I do it myself,” and, of course, the most essential sentence of all -- “Curran did it.”
He and Curran both think the funniest word in the world is “poop.” Indeed, they can sing songs that contain only that word. I think this is a boy thing.
Curran, now four and a half, does indeed try to keep Gavin “safe”, usually by issuing orders in a very grownup voice. He teaches Gavin all manner of things, including words that Curran is forbidden to say. Then when Gavin dutifully repeats the “bad” word, Curran tells on him.
But he also tries to explain the world to him and I’ve learned a lot from listening in. I learned that Curran knows that the smallest bone in our bodies is in our ears – he learned that at summer “camp.” I learned that Curran knows that some bugs turn into butterflies and some turn into moths, but that other bugs are just bugs – they don’t turn into anything. As Curran put it, “They’re just bugs ‘til they die.”
I watched as he showed Gavin “roly poly” bugs (also called pill bugs or sow bugs). He told Gavin they were teensy tiny armadillos – and you know, that is exactly what they look like.
But all is not sweetness and light.
Whenever the crawling Gavin did something Curran didn’t like, he would tell Gavin he was a “bad baby.” Try as they might, his mother and father could not get him to stop doing that.
But what goes around comes around.
Both my grandsons have red hair, and they have the quick tempers that often accompany such fiery locks.
Once Curran lost his temper at Gavin and hit him. I put Curran into “time out,” which means Curran has to sit on a chair in the room off our living room for several minutes. So as Curran is sitting there, Gavin toddles to the door, leans in, points at Curran and proclaims, ‘Bad baby! Bad baby!”
Take that, older brother!
But Gavin didn’t leave it at that. A couple of days later Gavin got mad at his mommy. He looked her right in the eye and said, “You a bad baby.”
His mother nearly fell down she was laughing so hard.
From that time on, whenever Gavin is mad at one of us, he tells us we are “bad babies.”
But now he does it because he knows it makes us laugh.
Gavin is learning to stand his ground and defend his toys against his big brother, but he also is quick to stand in solidarity with Curran against the grownups. If Curran is negotiating for a Popsicle, Gavin is his loyal backup, ramping up the cuteness factor by the bucket load.
But if Curran finishes his Popsicle first and tries to grab Gavin’s, Gavin will defend it with as great vigor, screaming, “Mine! Mine!” until an adult intervenes.
They are surrounded by adults who adore them, but both Curran and Gavin have figured out that my husband, their “Da,” is their greatest ally, since he dotes on them and never disciplines them. As a grandfather, he is a total and complete pushover.
That’s why, when one them gets in big trouble at either our house or at home, they announce, ‘I want my Da!”
They know when to bring in the big gun.
Posted by Katie Sherrod at 4:59 PM 1 comment: