A racist Atticus Finch is us, white people. All of us. 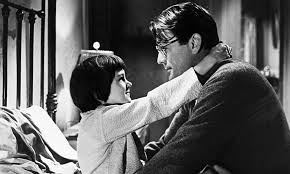 Like most people, I love To Kill a Mockingbird. I loved Gregory Peck as Atticus. I loved Scout and Jem and Dill and Calpurnia and Boo Radley. I've lost count of how many times I've read it, or watched the movie.

And I plan to read Go Set a Watchman. But like way too many others, I will not be devastated to read that Atticus turns out to be a racist in his old age. Why?

Because Atticus was a racist in To Kill a Mockingbird.

And so was every other white person in this nation then -- yes, even in the smug Northeast, from which many of these shocked and outraged book reviews are coming.

They couldn't help it. They were as immersed in the racism of this nation as fish are in water. And like fish that don't notice water until they are ripped from it, they didn't notice racism except when it threatened them -- or someone they cared about.

The characters in Mockingbird were immersed in what was perhaps a more blatant racism, but it differed only in degree from that of the rest of the nation. And this is still going on today.

Because being a racist is not just being a violent bigot who wants to lynch black men who dare to look at -- or worse, pity -- white women. Being a racist is taking part in and benefiting from-- either passively or actively -- the systemic oppression of an entire people simply because of their skin color. It's not just waving a Confederate flag, or using the N-word. Racism is being able to not even notice white privilege. It's assuming white children have an innocence that black children do not. It's according a dignity to white people of any age that is too often denied to black people of any age.

Ever wonder why Atticus' maid, Calpurnia, comes in the back door of the house instead of the front door? Because she's a Negro. Note that in the cast of characters, she and another black woman, Lula, are the only people without last names. And even little girl Scout and saintly Atticus call the adult maid by her first name while their white neighbor is called Miss Maudie. And while Miss Maudie is pretty open-minded, even she gives thanks for not being born a black person:

When Calpurnia takes Scout and Jem with her to her church, Scout asks, "Cal, why do you talk nigger-talk to the—to your folks when you know it's not right?"

Atticus is assigned to defend Tom Robinson, he doesn't volunteer to do it. But once assigned, it's more his ingrained sense of justice -- and his own self-image -- that causes him to put on a real defense as much as any outrage at the racism inherent in the case.

Remember the famous courtroom scene, when Scout sneaks into the balcony? All the black people are forced to sit up there, yet a little white girl and boy are allowed to be there too, while any little black girl or boy who tried to sit downstairs would have been thrown out. And while Scout calls Calpurnia, an adult Negro woman, by her first name, Scout, a white child, is called Miss Jean Louise even by the Reverend Sykes, the respected Negro pastor.

None of this strikes Scout or Jem-- or her father -- as strange.

Tom Robinson is called Tom, not Mr. Robinson, by Atticus. But he calls Atticus "Mr. Finch." Neither finds this strange. And even Atticus knew the best he could do for Robinson was to give him the strongest defense possible in the face of a preordained guilty verdict. Even though Robinson clearly could not have done what he was accused of, it didn't matter. Race trumped justice. Bob Ewell and his daughter may be trash, but they are WHITE trash, and that makes all the difference.

But when white trash Bob Ewell attacks Scout and Jem, and is knifed to death by the reclusive Boo Radley, a white man, Atticus, along with everyone else accepts it when the sheriff announces that Ewell fell on his own knife -- even though everyone (including the sheriff) knows Boo Radley did it. Here class trumps justice. An upper class, if reclusive, white man kills a trashy poor white man. No big deal.

It was all part of the racism and classism of the South and of all the United States, then, and now.

So get over your shock about Atticus, white people. He is us. All of us.
Posted by Katie Sherrod at 7:09 PM 6 comments: