While this holiday has holy historic meaning for my African American friends in ways I cannot begin to imagine, this is a day white people must mark as well, for it is the anniversary of the day news of the Emancipation Proclamation reached Texas.

On June 19, 1865, Union soldiers led by Maj. Gen.Gordon Granger landed at Galveston with news that the war had ended and the enslaved were now free -- two and a half years after Lincoln’s Emancipation Proclamation, which had become official January 1, 1863.

The news freed the enslaved people of Texas. Let me say that again -- the news freed the enslaved people in Texas. People held in bondage for generations were set free. Wives and husbands who had been sold away from one another began searching for each other. Parents began looking for children who had been ripped out of their arms and sold to other masters. Separated families began searching for lost members.

Contemplate that. Sit with that for awhile. In a state as big as Texas, imagine how much love, hope, and determination it took to not just sit down and weep as your search began. And that search had to happen in hostile territory, for plantation owners, clustered mainly in East and South Texas, weren't happy to lose free labor. For the most part, they weren't interested in helping former enslaved people in any way.

We Americans are bound together by that history, and it's time we owned that. The whip that left scars on the backs of enslaved people also left scars -- less visible and far less painful but no less real -- on the person who wielded the whip. One human being cannot hold another human being as property without them both being affected. Bondage is not a natural state. The human spirit yearns for freedom. In order to keep humans in bondage, systems had to set in place to enforce that bondage. And those systems drew their power from violence and terrorism. The penalties for running away to freedom were always horribly violent -- whippings that shredded flesh to the bone, often followed by maiming of the feet or legs. And that is if the runaway wasn't killed -- usually a long agonizing death by hanging.

White people benefited from those systems rooted in violence then, and now. The systemic racism that enfolded and enabled slavery is alive and well, and we are kidding ourselves if we don't acknowledge it. Your ancestors didn't have to actually own people as slaves to benefit from slavery -- all they had to do was be white and free. You don't have to hate people of color to be racist, You don't have to be a member of the Klan to be racist. All you have to do is fail to question and test assumptions, fail to look beyond the surface of your reactions to some people and events, fail to listen to people different from you. That's what white privilege is. It's not economic privilege, although that's part of it. No, it's privilege that lets us white people not have to ask those questions or face those issues. We can, if we choose, isolate ourselves from the realities of racism.

But when we do, our world becomes much smaller, much more fear-filled, much more restricted. This cozy bondage of privilege can be so comfortable. But that comfort comes at a price -- it can take your integrity, and eventually, your soul.

So this Juneteenth, let us white people resolve  to set aside our unexamined lives. Let's open our eyes and ears to the realities of the lives of our neighbors of color.

Sit with them and listen.

If we can do this, we may begin to heal this country.
Posted by Katie Sherrod at 9:22 AM No comments:


This video is how I will remember her -- happy and fun loving.

Molly was the essence of Good Dog. She was loyal and sweet and gentle and very protective of her people. Not aggressive, just protective.  She embodied unconditional love.

Molly arrived in our driveway and our lives one very hot August afternoon. I say at least 18 years ago, because the vet estimated she was a year and half to two years old when she found us.

When I saw this very thin dog in the driveway, I went out to check on her. She ran to the then vacant house north of us and hid on the porch. I got a leash and walked over. I sat on the porch steps with my back to her so I wouldn't be threatening and started crooning to her -- "It's OK, sweet baby. You're OK. Come on, Sweetheart, it's OK" again and again for about 15 minutes. Then a head appeared over my shoulder. I slowly turned around, gently put the leash around her neck. and started stroking her face. She uttered a great big sign and pushed her head into my chest, as if to say, "At last. I am safe."

A trip to the vet revealed a healthy but very starved and dehydrated dog. So I took her home and introduced her to the rest of the pack, and she settled in - eventually 45 pounds of hair and love. That scrawny dog in the driveway turned into a beautiful dog.

Last night she went to join all the dogs of my life - Ikey, Heidi, Beau, Colleen, Nikki, Maggie, Rusty, Esau, Mike, Jake, Angel, Ms. Wiggles, and Toby - in the care of St. Francis.

When the first of the Best Boys was born, he became her charge. When his mommy brought him here on her way to work, Molly greeted her and the baby. For the rest of the day, Molly was with the baby, even sleeping under his crib as he napped. Again, she was always between him and any person other than family who came into the house.

When he began to pull up, Molly was always there to be a steady furry rock against which to lean. As he began walking, he would hold onto her and she would pace beside him as he toddled around. If he cried,  Molly would come get me if I didn't respond fast enough to suit her.

When the second Best Boy was born, Molly assumed care of him as well. She would check on one boy, then go check on the baby. As the second Best Boy began to toddle around, Molly would do her best to keep an eye on both boys as well as on me. She got very worried if we were out of her sight for too long.

As the boys grew older and more independent, Molly still supervised them as best she could. And she played with her doggy friends, Mike the border collie, Esau, the dachshund mix, and Angel, the white lab.

Until one black day when the dogs got out of a gate left open, and ran into Ederville Road. Esau was hit by a car and killed instantly. Molly was badly injured. Angel wasn't badly hurt, but died soon of a broken heart, grieving for her Esau. We arrived home from a trip to find Mike alone and grieving, Molly still in the hospital, and a distraught Daniella and Tino who had to tell us what had happened while we were away.

We wept and grieved. We comforted Mike. We visited Molly at the vet, where she was recovering from a broken shoulder and a broken hind leg. Every day, I crawled into her large cage and held her as we both grieved. I told her she had to get better and come home, that we needed her.

And she did. Mike was overjoyed to see her and the two dogs comforted one another over the loss of their pack. Daisy the Corgi arrived and she and Molly became playmates. Mike ignored Daisy until the day he died of old age.

When two soft coated wire haired dachshund puppies arrived, Molly took one look and adopted Ms. Wiggles and Toby as her puppies. They were ostensibly Gayland's dogs, but in Molly's mind, they were her babies. 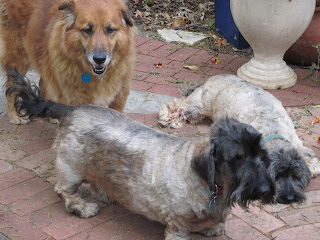 And they remained her babies until first Ms. Wiggles died, much too young, of a tumor in her heart, and three years later, Toby. We never knew why Toby died. It baffled the vets and left us bereft once more. And Molly grieved again.

By this time, the Best Boys were turning into teenagers and Molly was slowing down a bit. When one Best Boy turned 14 last year, we realized that Molly had to be at least 17 years old. We were astonished. She was still in good shape, a bit stiff when she first woke up, but still playful and funny and always loving.

Then Samantha, a dachshund mix, arrived, and later Ms. Buttons, another rescue, and Mr. Carson, an elderly teeny dachshund, joined us.

And Molly began to sleep more. As her eyesight faded, she wanted to be touching me whenever we walked in the garden. We walked slowly, because her healed leg was beginning to stiffen. 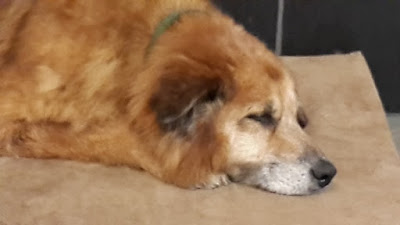 And often, when she slept, she'd wag her tail. I hope she was dreaming of running pain free with her pack.

And finally, it was clear she was in pain, It was time to let her go to a place where she could be young and pain free, happy with her pack until I can get there.

So we all said goodbye. The Best Boys and their mama brought a bouquet of happy flowers, Gayland helped wrap her in a soft towel. Next week we will have her ashes.

But it's very lonely today, with this Molly-sized hole in my life. 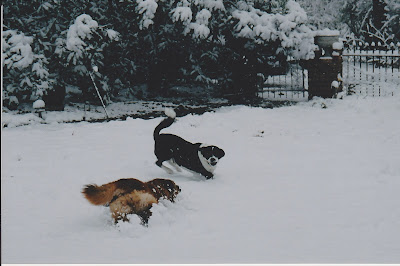