Today is Gayland Pool's 82nd birthday.  Somewhere he is celebrating, I am sure, because he always liked a party. 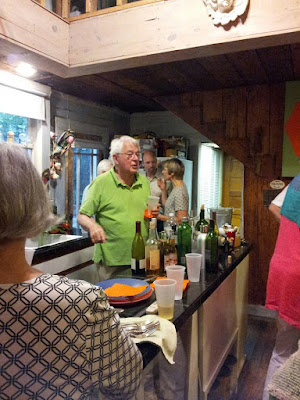 He loved nothing more than gathering up all the people he loved -- and that was a LOT of people -- and plying them with food and drink and all the hospitality his generous soul could provide. 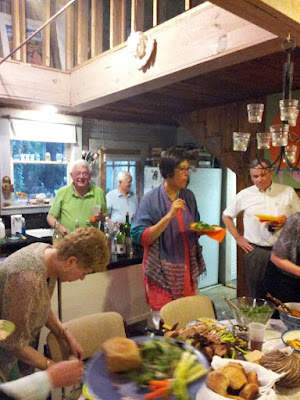 Gayland loved using the occasion of his birthday as a way to help others. One year we had a concert to raise money for Sudan. Another year we hosted folks organized against the death penalty in our garden. In other years, we  hosted fundraisers for animal shelters, the Women's Center and Women's Haven, and for politicians we supported.

For someone with such a generous soul, he was really bad at accepting gifts. He felt it was a waste of money, money that could have been used to help someone else. Partly, this was because he didn't hesitate to buy things for himself, particularly books and works of art that spoke to him. He knew what he needed to feed his soul, and if he could figure out how to afford it, he bought it.

But partly it was, I think, that at some deep level he didn't believe he was worthy of generosity. While I suspect I know the origin of this, I cannot be sure. This reluctance to accept gifts was something we talked about every Christmas and every birthday -- that he loved giving gifts to folks, and that he should allow folks the same pleasure in giving gifts to him.

"All you have to say is,  'Thank you,'" I would say to him, when he would begin in on how people shouldn't have spent the money, etc. And he would grimace and say, "Thank you."

Gayland's feeling of unworthiness is common, I believe, among people of his generation. Children of the Depression were raised amid scarcity, hard ground indeed for a theology of abundance to take root. He could be very tight with money. And yet, Gayland epitomized abundant love for others. It was mostly with himself that he was ungenerous.

To watch him move through a room, smiling, grasping hands, gently touching a child's head, an adult's arm, focusing intently while engaging with each person was to watch a lover of humanity in action. Children knew this instinctively. I can't count the number of times we would be stopped in a store or on the street by the sudden appearance of a small child who had wrapped him or herself around his leg. I soon learned to just stop while Gayland engaged with the child and I scanned the space for an anxious looking parent. Sure enough, here would come an adult, calling the child's name and looking simultaneouly relieved and suspicious. Who were these people with their child? Gayland would greet the parent, and gently unpeel the child, who usually was chatting away with him, and introduce himself and me. Within seconds, the parent relaxed, the child was transferred -- although occasionally one would insist tearfully that  he or she needed to go with Gayland - names were exchanged, and off we'd go on our interrupted errand. More than once, the parents and children turned up in church the next Sunday.

He was a child magnet. I think they recognized something childlike in him, a joy and amazement at being alive that they shared. His grandsons certainly knew they had an unfailing advocate in their Da, who believed they could do no wrong, ever. He was amazed at having grandchildren, and thought they were the most special, handsomest, smartest boys ever -- the Best Boys in the World. And of course, they are.

Just in time for his birthday, I finished some much needed work in the farmhouse, work that had been put off while we dealt with his illness, and then I dealt with losing him.

It has been a bittersweet experiece, because it is the kind of project we loved to do together, playing with space with Tino's help. I know he is pleased with the work, because if he wasn't I suspect he would have found ways to let me know.

So happy birthday, my love. I miss you every day.

And here's the latest project: 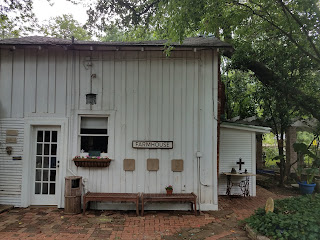 <<<<< You know the south porch that was falling down? I did as we talked about, my love, and took that wall out to add room to the kitchen. 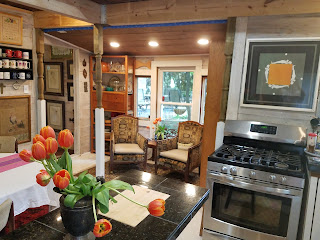 You can see we whitewashed the floor like we talked about doing. 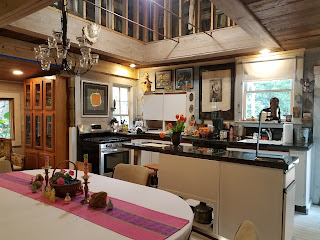 <<<<< I also removed the exposed shelves, and lowered the cabinet to I can reach it -- without my tall person here, I needed to do that. And I put up art where the open shelves were. 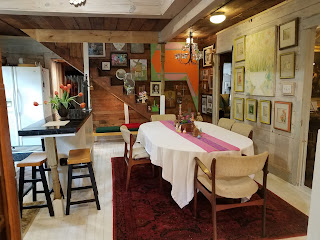 I also took the wall out to expose the stairs and open up the space beneath them as we'd talked about. >>>>>

And I took out the appliance center we never used and turned it into a seating area at the bar.     >>>>>>> 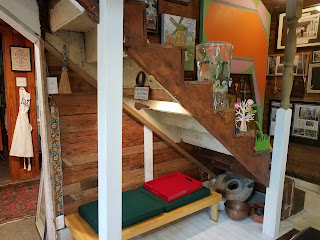 <<<<< I added lighting to the open space under the stairs and put a bench there to stow purses and things when we have a party. 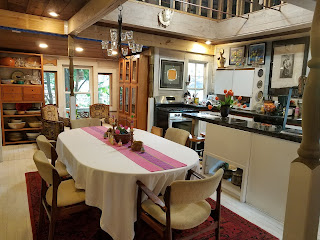 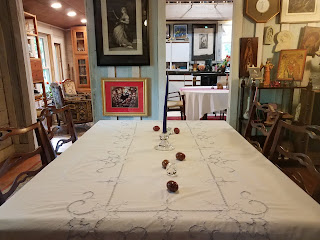 <<<<<< Here's the view into the kitchen from the dining room. You can see the door in the corner has been removed when I opened up the porch. It makes the dining room much lighter. You'd like that.