Ruminating on a rumor 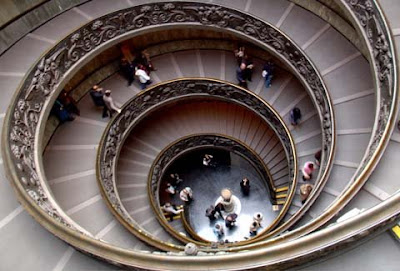 Let us consider rumors.
I want to give fair warning -- rumors are rife in the Diocese of Fort Worth, always have been, because our leadership is so secretive and tight-fisted with information. Add to that the fact that the level of trust among the clergy, and between the clergy and the laity, is about as low as ocean mud and the fact that anxieties are about as high as the sky, and you get a fertile ground in which rumors sprout.
People tend to take the tiniest scrap of information and examine it to within an inch of its life to see if they can discern any clues as to the shape of the future.
So I'm pretty wary of rumors. I've heard so many in the past few months that mostly I quit listening.
But one rumor has been so persistent, and so long-lived, and has come to me from so many different -- and often unexpected -- sources, that I'd thought I'd float it out there for the rest of you to natter over.
There are two versions of this rumor:
The first is that Bp. Iker and his allies in the diocese have never had any intention of going to the Southern Cone [many thought it was a weird match anyway, with the Ikerites being such high Anglo-Catholics and the Southern Coners being such low Evangelicals]. What they really plan is to go to Rome. Yes, Rome, as in the Roman Catholic Church. With the Pope. And the Vatican.
The second version is that Bp. Iker and his allies in the diocese will go through the motions of aligning with the Southern Cone, and THEN will make the switch to Rome, as in Roman Catholic. With the Pope. And the Vatican.
Proof of this is offered. "People say" that Bp. Iker lunches regularly with Kevin Vann, the Roman Catholic bishop here. "People say" that others of the clergy have traveled to Rome recently "for talks." "People say" that it makes more sense than the Southern Cone.
I say that it's interesting, but I'm having a hard time getting my head around the membership of St. Andrews downtown and the Roman Catholic Church. Or several other parishes here. Listen, we have Episcopal churches here filled with Baptispalians -- Baptists who like liturgy -- and who decidedly do NOT like the Roman Catholic Church. Anti-papist sentiment is almost part of their DNA.
And why on earth would Rome want to take on a legal fight over property now? They've had quite enough of court fights in recent years. And besides, they already own churches the size of municipal coliseums. Most of our Episcopal churches would probably fit in their baptismal fonts.
And -- biggest question of all -- would Bishop Iker give up his orders to go to Rome? I can't see them recognizing his orders -- they haven't for anyone else. And I don't think they are going to take on a married bishop. Talk about opening a can of worms! They've already got lots of their own clergy irritated at all the married Episcopal priests they've taken in to date.
So. There it is. The rumor.
Posted by Katie Sherrod at 5:39 PM

Don't worry too much about this one, Ms. Sherrod. Just because some folks from our diocese may choose to spend a few days visiting Rome doesn't mean much. It is natural for a student of early Christianity to want to visit the Eternal City during its lovely summer months, after all.

What actually matters is that leaders of our diocese have spent an enormous number of hours in the last two years on planes, buses, cabs, etc, travelling to Santiago, Nairobi, Kempala, Jerusalem, and other far flung places in order to shore up our relations with international Anglican orthodoxy. And now the bishop is off to endure the manifold challegnges and indignities of the grand Lambeth gabfest. Our diocesan leaders wouldn't be putting themselves to that much trouble if it was just some elaborate "cover operation" for a secret mass swim of the Tiber! (I, for one, have no plans to take the plunge. I promise!) You can relax about this rumor. Cheers.
Rev. R.W. Foster
Chaplain, St. Vincent's School
Bedford

In his first public comments on the Lambeth Conference, Pope Benedict XVI has warned Anglican leaders that they must find a "mature" and faithful way of avoiding "schism". On top of this the Pope has:

* Sent three cardinals to the conference in Canterbury, including one of his top aides from the Vatican, to act as personal intermediaries between the two churches;

* Let it be known that he does not support the defection of conservative Anglicans to the Roman Catholic Church;

* Given behind-the-scenes support to the Archbishop of Canterbury's attempts to hold together the conservative and liberal wings of the Anglican Church, including at face-to-face meetings in Rome.


One can imagine that this will not be well received in some quarters. I also think that this is in no small part because he's already facing complaints about married Clergy in the Latin Rite. I also think that what ever plans he really has for the future of the Roman Church would only be complicated by a pack of priests who have a proven track record of not wanting to go along with a program if it doesn't match what they want exactly.