EWC Board applauds CofE vote
The Episcopal Women’s Caucus (EWC) Board applauds the Church of England Synod’s vote on July 7 to “affirm that the wish of its majority is for women to be admitted to the episcopate” and to prepare by February 2009 a first draft of a “national code of practice” outlining how this will be accomplished.
“The Caucus is celebrating this great news,” said EWC President Elizabeth Kaeton. “The Church of England ‘allows’ women to be ordained to the diaconate, and for the past 15 years the C of E has ‘allowed’ us be ordained to the priesthood. But women have not been ‘allowed’ to be appointed bishops, keeping the stained glass ceiling firmly in place.”
Bishops are appointed in the Church of England, not elected in a diocese by clergy and laity as they are in The Episcopal Church.
Kaeton and EWC board members are cautiously optimistic as the Church of England moves forward, including discerning how to “accommodate” those who will not support the episcopacy of women.
“While it is important to make room for the multitude of voices in the Church, it is vital to maintain the authority of the office without regard to the person holding the office,” Kaeton said. “Any accommodation must not be used to legislate sexism.”
The EWC will continue to work for the Gospel values of equality and liberation and committed to the incarnation of God's unconditional love --- including and especially in the Church, said Kaeton.
“Women and men who have heard the liberation promised in the gospel of Jesus Christ, and who understand ourselves worthy, through Christ, to stand before God as children of God, will work together to continue to crumble the ideology of patriarchy and the system of sexism,” she said.
--------------------------------------------------- 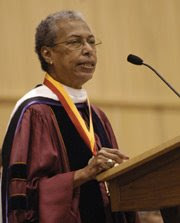 Just in case any of you have forgotten, here's the Anglican Communion's first EVER bishop who is a woman -- the Rt. Rev. Barbara C. Harris, elected suffragan bishop of the Diocese of Massachusetts in September 1988 and consecrated on February 11, 1989.
Her election was pronounced "the final crisis" by the Episcopal Synod of America, which is one of the forefathers -- I use that word deliberately -- of the Gafcon crowd. Much of the same overwrought language that they used about the vote to ordain women as priests was recycled in their outrage over the election of a woman as bishop. It's the same language they are still using in regards to the election of Gene Robinson. And it's the same language the conservatives in the Church of England are using now.
But what amazes me most each time is their description of themselves as a persecuted group being driven out of the church by decisions such as these.
What they are, is a group of privileged men who have been disagreed with. As my young friends say, build a bridge and get over it!
Posted by Katie Sherrod at 1:27 PM

Do you speak to women's groups? If so, how do I contact you?

I do speak to women's groups, but I will be out of the country until mid-August. I can be reached at
ks1246@aol.com