The bishops of the Episcopal Church are providing informal briefings for the press each afternoon. Friday George Councell, bishop of New Jersey, did the briefing. 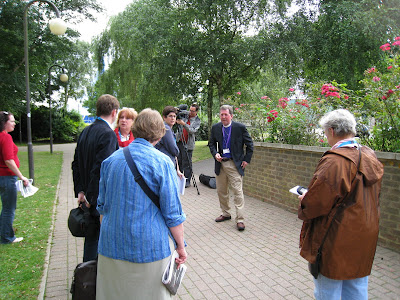 “As you know we are in the second day of our three-day retreat for the beginning of the Lambeth Conference and started our small group bible studies of eight in each group. And I’d like to say that the bible studies universally as I’ve talked with my brother and sister bishops are being very well received -- small group fellowship, study, prayer, all forms a very strong foundation for the weeks ahead. I myself have been privileged to listen to stories of challenges of mission and ministry in places like South Africa and Tanzania, Australia and upper British Columbia in Canada as well as tales from my colleagues here in the United States. So that looks like a very sustaining and strong feature of the conference going forward.


“Then we for the second day went to Canterbury Cathedral. Some of us enjoyed the walk from Kent University down to the Cathedral and that had a kind of pilgrimage feeling to it. We walked in different configurations with different bishops from all over the world and then arrived only to have the immense privilege of having the precincts and the entire cathedral to ourselves for these two days. It’s a wondrous place, a wondrous historic space obviously of great symbolic significance to us as Anglicans and to be gathered in the nave there and to sing, to pray and to listen to the archbishop of Canterbury has been a great source of strength. I personally believe with any of the bishops this is a right and proper foundation for the work that we’ll do over the next couple of weeks. And I can hardly stress enough how privileged one feels to sit in that group of 650 bishops and have the opportunity to listen to the archbishop of Canterbury give us really substantive and profound spiritual reflections and really important challenges about how we’re going to live and serve together as a communion going forward.


“And in his fourth meditation, he began by quoting an early Christian theologian who said that the single Christian is no Christian. Christians live and serve in community. And he went on from there to address, I thought quite directly and quite profoundly the need that we have as a Communion at this time to restore a wounded Communion for the benefit of a wounded world – those are my words not the archbishop’s words.


“He had two very practical challenges, one which was to think of a bishop about whom we might feel nervous going forward and then to go to that person today and ask that person to pray with you.


“We have had time to walk together and to pray and to reflect together and it’s made for a very strong and a very good beginning for the Lambeth Conference.”


Then he took questions. Rachel Zoll asked him if it was becoming clear that different bishops had different understandings of the role of bishop.


“I think we do serve in different contexts and operate out of different heritages. So quite a bit of the work, I think, is to be in the small group bible study and listen to the different context and challenges and to understand that our perceptions of our role varies but the archbishop has been laying that out very strongly and very clearly in his meditations,” Councell said.
I asked him if being in the Cathedral created a palpable sense of being in a sacred space, a sense of true pilgrimage.


“I do sense that in myself. It’s profoundly moving, for example, to sing in that space and the bishops are singing together. I take great hope that we came and we sang together. We pray together. One of the most moving dimensions of doing liturgy together is that we’re invited to pray in our own, pray the Lord’s Prayer in our own languages. So it begins, and it’s just sort of a beautiful muffled rumble of voices and sounds and languages as we pray the Lord’s Prayer. Somehow we start together and we conclude together and then singing together with different harmonies. It takes different notes to make a harmony, doesn’t it, so that’s been moving,” he said.


“And to come to your question another way, I looked down on the pavement in front of me as we were praying our evening prayers and there was the marker for a bishop who served from 13-something to 1362. That puts you in a different space, doesn’t it, spiritually and historically and in different contexts. We’ve been at this for a long time in the Christian movement.”


Another reporter asked, “Was there a sense of a void or sadness in your heart that Gene Robinson was not among you at these retreats?”


Councell said, “In my heart personally a very deep ache for my brother . . .’ and then had to stop because he choked up and had to compose himself.


Another reporter asked if a broader range of issues are coming come forward in addition to human sexuality.


“Yes, I think we are staged for that in the weeks to come by the different themes that will be presented, one of which is human sexuality, and again, I think we’re laying the foundation to engage those as colleagues as part of one Communion to work together and serve together. I think we’re on the right track,” he said.
Posted by Katie Sherrod at 3:07 PM