The Eyes of Texas are on Lambeth

Michael Bell -- the young man whose back is to you in this photograph -- and I are hard at work trying to get set up to publish a daily newspaper. Since we are both from Texas, we decided to mark our space clearly so everyone will get the message -- don't mess with Texas. 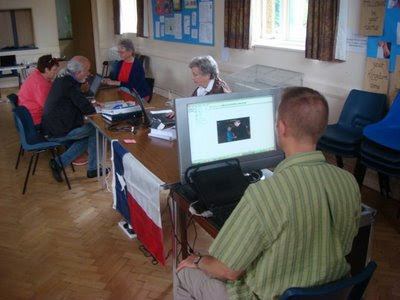 We are busily setting up the Communications Center for the progressive groups who are working together at the Lambeth Conference. The center is in St. Stephen’s Parish Hall, which the parish of St. Stephen’s Canterbury has graciously rented to us. It is here that we will produce The Lambeth Witness, the daily paper I will be editing. 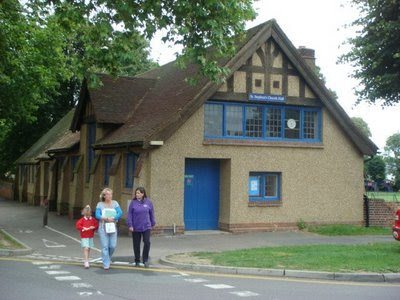 The challenge has been to make sure computers from the US and computers from the UK can be used without blowing either up. This is a room with a total of four electrical outlets – one outlet on one wall with two plug-in opportunities and one outlet on the other wall with two plug-in opportunities. Plus, we need to run a copier capable of making 2000 copies a day, and an Ethernet setup.
I am trying to stay out of the way while much more knowledgeable people tend to all this. Michael, the multi-talented young man who will be doing the graphics and layout for the paper, and I are doing our best to get organized in the midst of all the busyness. 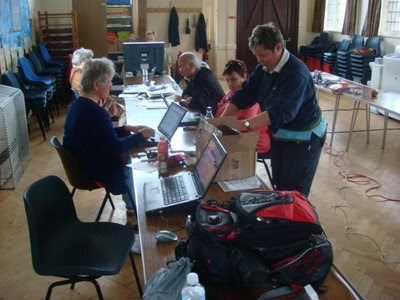 It’s an odd time – the Lambeth Conference has started, but not really. By that I mean that the bishops are all here, but they are in retreat in the Cathedral for three days. The gathered press is left with nothing to do, so they are doing the inevitable – gossiping, speculating, chewing over every teensy BIT of information and, of course, griping.

The organizers of the conference have been saying all along that there won’t be much happening for the press to cover, but I don’t think the British press believed it. The problem is, when you don’t give them something to cover, they FIND something. I predict this will lead to lots of silly and overblown stories that will drive the conference organizers nuts.
And it’s their own fault. They didn’t even let the press in to witness the welcoming ceremonies in the big top.
Oh, yes, the big top. That’s the “marquee” or, as we call it in the US, the tent in which the plenary sessions will be held. Lambeth is taking place on the campus of the University of Kent. When one is driving up the hill on which the campus sits, the view of the two peaks of the tent looming over the rooftops gives new meaning to the term “Mother Church.” 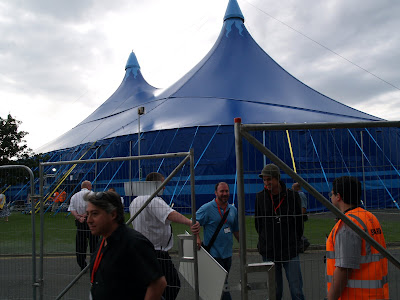 I am also announcing a contest to name this color of blue. It is nearly iridescent. Blindingly blue.
Have at it.
Posted by Katie Sherrod at 12:57 PM

Hi, Katie - I looked at the marquee and read your color question and thought, "Lake Tahoe." See http://www.terragalleria.com/america/nevada/lake-tahoe/

So that's my submission. Keep up the good work.

Hi, Katie - my immediate thought was that this color is, "Lake Tahoe." See http://www.terragalleria.com/america/nevada/lake-tahoe/

Keep up the good work.
Amy