On Friday, July 25, 1984, I wrote a column entitled "One of Fort Worth's small treasures reopens."

It came to mind as I read stories of the reopening a newly re-done Paris Coffee Shop, the owners of which hope to carry on the legacy of this home town treasure. I have not visited the new Paris yet. But I do remember the old one.

Well, all is right in at least one little part of the world.

The Paris Coffee Shop on Magnolia is open for business this morning, after being closed all week to repair the damage caused by a fire Saturday night.

"The firemen did a great job," said owner Mike smith, adding that there was almost no water damage.

Even through Smith has business interruption insurance, he had been working at top speed to repair the damages so the coffee shop could reopen.

Why the rush? After all, his insurance would make up the money he would lose while the business was closed for repairs. He could have proceeded at a more leisurely pace.

Smith hurried because he has a good understanding of what his customers expect of him. They expect him, and his place, to be there.

After all, the Paris Coffee Shop has been there for many of those customers since Smith's father, Gregory, opened it in 1930. Mike Smith has been running it for 21 years.

When it's closed, its absence makes a major hole in customers' lives. The Paris is part of the daily or weekly routine for hundreds of people. The inexpensive but good food, the friendly service and relaxed ambience have all helped make the Paris a Fort Worth fixture. 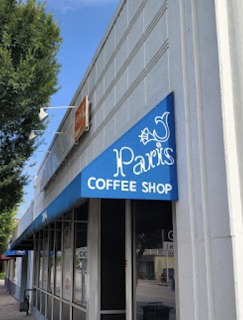 But the biggest reason is the customers themselves. They are a motley crew, ranging from construction workers to hospital district employees to businesswomen and men to parents with little babies to retired couples to an occasional street person.

They come there for more than food. They come to make deals, to explore ideas with friends, to have meetings, to relax on coffee breaks, to meet people, to make decisions, to write letters, to read newspapers, to work puzzles, to plan little personal revolutions, and to warm their hands and hearts overs a cup of coffee.

They come in groups and they come alone. Some come assuming they'll see someone they know, while others come in hopes that they'll feel slightly less lonely.

They come in business suits, in jeans and T-shirts, in jogging shorts and in formal dresses. They even come in costume -- and not always just at Halloween.

This diversity makes for a colorful crowd and interesting mixes of people. It creates an air of friendly equality and unquestioning acceptance. At the Paris, people are assumed to be good unless they prove otherwise.

In short, the Paris is very much like the city it serves. This coffee shop could, on any average day, serve as a metaphor for Fort Worth. That's why it's a place city leaders should visit often, especially when they start getting ideas about Fort Worth needing an "urban, sophisticated image" in its leaders.

The Paris isn't the only place like this, of course. There are other such places in Fort Worth, and certainly in Arlington and the Mid-Cities.

Such places are local treasures. Some are coffee shops and restaurants. Others are small stores or shops. Still others are public places, such as libraries or post offices or parks.

They can be anywhere, in any structure, in any space. What sets them apart is that they have been made special by the people who congregate there.

Such places cannot be built. They just sort of grow, getting rubbed into being by the people who use them, who have nudged and prodded and poked at them over the years until they fit, like a comfortable old shoe.

Sometimes the process is aided by a proprietor who is smart enough to nurture the process, and sometimes it happens in spite of the owner.

it is important that city officials, business owners, and other community leaders be sensitive to the existence of such places. They should be vigilant about changes that might destroy them and be willing to think creatively about ways to preserve them.

A case in point is the old Burnett Park. The refurbished park is lovely, but certainly it is not the treasure the old park was, and, I suspect, it never will be. I choose to believe that city officials simply did not understand how special the old park was in the hearts of the people. If they had, they could never have treated its refurbishing as they did, as simply another routine agenda item. They never would have turned it refurbishing over to some out-of-town design group who had no hope of understanding how the people felt about that park.

The Tandy Foundation got what its generous gift paid for -- an elegant entrance plaza into its office building. But the city lost one of its people-created treasures.

A city can't afford to lose too many of those. They are what make a city a home, instead of a place to just live in for a while.

Posted by Katie Sherrod at 8:31 PM