Why the Sherrod Women are marching


After we elected a man who has promised to wipe out decades of legal and civil rights gains for racial minorities, women, immigrants, the LGBTQ community, for the disabled - justice issues I have fought for my entire adult life, I turned for solace to some of the people for whom I have done this work, my daughter and my nieces. I was reminded that Sherrod women don’t give up. We resist, speak out, fight back. 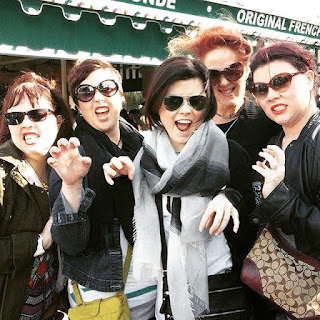 My daughter, Daniella Judge, and I had taken part in the Mobilization for Women’s Lives March in Washington in November of 1989. It was a powerful transformative event. This time, for various reasons, we can’t go to Washington. But Daniella and I and her cousins – Julianne Sherrod, Gina Sherrod Hlavaty, Margaret Sherrod LaBarba, and Emily Sherrod Aronoff -- can go to Austin and take my three-and-a-half year old grandniece with us. We are fortunate enough to have the flexibility and the resources to go. And Emily is happily putting us up.

Why we going? I believe our democracy is in real danger. We have elected a demagogue made doubly dangerous by his narcissistic inability to recognize what he doesn’t know, hence his facile dismissal of “experts.” His coziness with Vladimir Putin is proof of that. On January 21, 2017, millions of women across this nation will say as one – not here, not now.

Daniella is going “because I can't imagine where else I would be on a day when this many women find it this imperative to make our voices and our opinions known.”

Emily said, “This is my first march. I live in Austin, and thought it made sense to invite the fiercest women I know, my aunt and my cousins, and march together in support of one another and for every other woman out there. I felt it was important to join in this effort to show solidarity with everyone else who is angry, worried, and scared about where our country is headed.

Julianne, said, “I am bringing my 3.5 year old daughter so she can see that we are fighting for her future. As far as why - I saw the hate and anger generated by Trump during his rallies, I saw the mob mentality and the willful blindness to his character flaws. I saw his denigration of the most vulnerable in our society. I saw hate groups embrace and celebrate him. I saw the debates where he could barely form a sentence, much less a cohesive policy argument, and I was sure that the American people would want to stand for Truth, Justice and Equality. We did not as a country stand up for those values, but we as individuals must.”

Her sister, Margaret, said, “This is my first march. I am going to stand with my family and everyone else who supports women's rights, social justice, kindness, equality of opportunity and love.

Margaret’s twin, Gina, said, “I will stand at the march as a small person among a great force and be so proud. The shocking results of this presidential election made me realize that if I want change then I will have to be a part of the voice for that change.”

What do the Sherrod women hope the March will accomplish? I hope it will put Republicans on notice that they do NOT have a mandate, that they did not win the popular vote, and that we, the people, stand ready to resist their efforts to dismantle the gains of the last century and a half. We will hold them accountable.

Daniella said, “I hope this show of solidarity and resolve will display to our local, state and national legislators that women will not stand still while our rights and freedoms are dismantled. That we refuse to cede the ground our mothers, grandmothers, and other heroes fought for. We cannot and will not go back.”

Julianne said, “I know it will empower and motivate thousands, maybe millions of Americans who did not vote for him or who are now seeing through his lies, and get them involved in the political process. If [our elected officials] don't hear from us, they're certainly hearing from their echo chamber supporters or from special interest groups that can put millions towards persuading them to ignore their constituents' best interest. It's harder to do that if the constituents are communicating, staring them in the face, standing up and walking on their front lawn! I also hope this march will allow Trump to see that there are millions watching his every move who will not stand for intolerance, hatred, and the destruction of civil rights.”

Margaret said, “I hope this march helps to show the strength we have as individuals, the power we have together, and the courage we have when we show unity in a peaceful march.”

Emily said, “I hope to show the incoming administration that we do not support their views and policies, and that we will not tolerate injustice or discrimination. We stand for truth, justice, and equality for all.”


Note: A shorter version of this was published in the Dallas Morning News on January 12, 2016.

Thank you and your strong family of women for helping us all express our incredulity that this new regime has gotten where it is today. Not just incredulity but resistance and action to protect our civil, constitutional, and human rights. May we all march forward to preserve sanity in our society. May we all march forward to preserve hard won progress. See you in Austin fellow citizens‼️
Sue Sherrod in Dallas