The Archbishop issues a threat 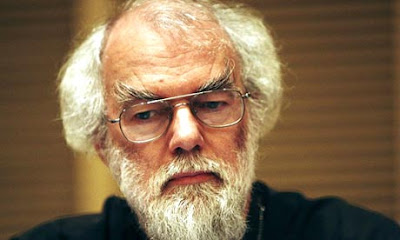 Like all young children, one of the biggest events of his young life is his birthday, or more specifically, his birthday party.

To his mind it is the grandest most excellent event one can imagine, and therefore, an invitation to this event is a prize beyond price.

Because we adults who adore Gavin are not idiots, we say “no” to him when he asks to do something that’s dangerous or inappropriate, or wants something of us we are not prepared to give to him.

If you have somehow missed this fact, in addition to being a superbly qualified candidate for bishop, Glasspool is also honest and open about the fact that she’s been living in a committed relationship with her partner Becki Sander for 22 years.

“The election of Mary Glasspool by the Diocese of Los Angeles as suffragan bishop elect raises very serious questions not just for the Episcopal Church and its place in the Anglican Communion, but for the Communion as a whole.

“The process of selection however is only part complete. The election has to be confirmed, or could be rejected, by diocesan bishops and diocesan standing committees. That decision will have very important implications.

“The bishops of the Communion have collectively acknowledged that a period of gracious restraint in respect of actions which are contrary to the mind of the Communion is necessary if our bonds of mutual affection are to hold.”

Paraphrased this means, “if you don’t do what I want and refuse to consent to this election, I won’t love you anymore and I won’t invite you my Lambeth party.”

It’s a threat, folks, and interference in our polity that is breathtaking in its arrogance. What’s more, any “bonds of affection” that can only hold if bolstered by threats don’t have much to do with affection and a lot to do with bondage.

The Episcopal Church at General Convention made a very clear statement about where we are on the issue of human sexuality and priests and bishops in Resolution D024. We are committed to the Anglican Communion AND we are committed to following our canons.
So here’s some questions for the bishops and Standing Committees of the Episcopal Church:
Are we going to consent to the election of bishops based on the gifts they bring to the church, or are we going to consent to their election based on threats from bishops in other Provinces, including the Archbishop of Canterbury?
And if we give in to this threat in the guise of exercising "gracious restraint," what kind of communion will we find ourselves part of? And at what price?
Posted by Katie Sherrod at 5:02 PM

Our position in the AC will not improve if we "give in". While some may hate us even more if we consent, others may see hope for their own futures. I doubt my bishop will vote for her. He made it known at GC2009 that the AC is more important than Jesus's love for all. I hope our SC is wiser.

Where is his threat to Uganda? to Nigeria? They have certainly never lived up to their end of the bargain to be good shepherds to the LGBT persons under their care. Let's hear some outrage from him about that for a change.

The comment about threats and bondage was right on. No love ever came into being by way of a threat, and where is the "gracious restraint" toward GLBT persons in the pending legislation in Uganda?

I'll say it again: if preserving the Anglican Communion matters more than preventing the violence that could come to GLBT persons in Uganda if this bill is passed, then I believe that the line between preservation and idolatry has been crossed.

We need to pray for everyone with any power to prevent the passage of this bill, especially the Archbishop of Canterbury. May they be open and receptive to hearing and and doing God's will for God's people.