The Once and Future Episcopal Diocese of Fort Worth

On Saturday, Fort Worth Via Media held an event entitled The Once and Future Episcopal Diocese of Fort Worth -- Dealing with the present, planning for the future. 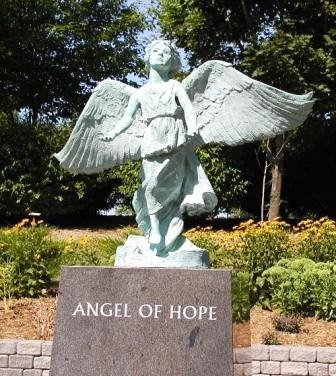 A panel of professional counselors both lay and ordained offered tools for coping with the stress, anxiety, anger, grief, and fear many have been suffering as we move closer to our diocesan convention. That's when our leadership will urge delegates to pass illegal resolutions they claim will realign the diocese with the Anglican Province of the Southern Cone. Regardless of the illegality of their move, the effect on the ground will be split parishes, split friends, even split families. The grief already is palpable.

The panel offered much good advice, including using humor and visualization, and stressed the importance of staying in community through the coming days.

We broke into small groups, each facilitated by a counselor, to give individuals a chance to express their feelings about the impending split. There were some tears, some anger, and much much sadness.

But then we moved on. Each group was next asked to talk about their dreams, hopes, and vision for the reorganized continuing Episcopal Diocese of Fort Worth.

What we came up with said as much about the current diocese as it does about our hopes for the future.

One group expressed it like this -- “a joyous and welcoming community of the Body of Christ – a beacon of hope in action – participating the Kingdom of Heaven.

Another group expressed it as “lay-led, clergy guided, Christ-centered.” We want clergy to be pastoral, inspired and accountable. As one group put it, we want “strong honest clergy; leaders who feed their sheep.” The first group that mentioned wanting a diocese “open to priests who are women” was greeted with loud applause in the room and remarks of, “At last we can say it out loud.”

A desire for an enhanced respect and a larger role for lay people – especially women -- was a strong theme in all the reports. We want EFM to be common and accepted. We want the Baptismal Covenant taken seriously by all in the diocese. We want lay people to feel empowered to speak up!

We want better Christian Education programs, for all ages.

Another group wrote that they want a diocese where we can have “the audacity of hope.”

All the groups wrote that we needed to educate people about the Episcopal Church’s history, beliefs, and polity, to counter the misinformation that’s been so prevalent for so many years. We need to “reclaim the brand,” one person said. Everyone wanted to “rejoin the mainstream of the Episcopal Church,” especially to make use of national and provincial resources for youth.

Youth – the word was heard again and again. That we had to invest money in youth ministers, that we might have to combine resources to have a diocesan youth minister at first, but that it must be a priority. We want to have “more kids in our church and more church in our kids.”

We want a diocesan center for social justice issues that will gather resources to help parishes work on issues of the elderly, employment, health, homelessness, hunger, people in prison, housing, immigration. The desire for diocesan leadership on social justice issues, including the MDGs, was expressed again and again.

We want better diocesan-wide communication, not only from the diocesan leadership, but also among parishes. We no longer want to be isolated from one another, divided by fears of differences.

We want our diocesan canons and constitution brought back into alignment with those of the Episcopal Church. We want to use the language of love when talking with and about one another.

We want the continuing diocese to welcome back those Episcopalians who have been worshipping elsewhere as well as those who may choose to leave with the bishop, but change their minds later.

We want our diocese to participate in inter-faith, inter-denominational dialogues in our community. We want a diocese that does outreach to the community, that lets our community know we are here to do the work of the Gospel, not fight over who’s out and who’s in.

We want a bishop who is freed to do the job of chief pastor to the clergy, teacher and shepherd to us all. We do not want a bishop to become a CEO. We can hire someone to do that [and we can fire them, too.]

Pray for us as we move through our convention this weekend and on toward building this vision in the Episcopal Diocese of Fort Worth.

Thank you, Katie, for this excellent summation of the inspirations spoken at the meeting.

Thanks for your post. I have suggested that those of us in the process of reorganizing the Diocese of Pittsburgh read it, as our dioceses have shared many ills in common. Our prayers are with Fort Worth this weekend and beyond.

Utterly lovely, a clear expression of who we are called to be as a church ... know that the entire Episcopal Church holds Fort Worth, Quincy, Pittsburgh, San Joaquin ... in our prayers and hearts.

What a wonderful call to be the Body of Christ! Hold this up high enough and They Will Come!

Katie, it brings tears to my eyes when I experience such optimism and hope after to many years of being beaten down.

You will find great support in the coming time from the Diocese of the Rio Grande which, just a few years ago, was threatening to split.
Tom Woodward
Santa Fe, NM

Katie,
The Episcopal Diocese of San Joaquin is praying for you. We also stand ready to help wherever we can. Let us know and we will accomplish the task.

My heart is so divided over all of this -- I long to be with you all while I am so thankful I am apart from it all.
But you know that part of me will always be in Fort Worth. I will be with you the whole day long -- even as I stand in protest at the Old Courthouse in downtown St. Louis against Prop 8 passed in CA.
Soon and very soon...you all will be truly a part of the Episcopal Church.

I am storming heaven for you all in Fort Worth. As President Elect Obama (doesn't THAT sound wonderful?) says, "Be the change you seek."

You now have a Cone of your own.