A rainy day in Canterbury

I am sitting by a window in my hotel room. We moved into a hotel for the two nights before we go home because the cottage three other women and I were sharing had to be vacated Saturday morning. I am staring out at the magnificent tree in the hotel’s garden, trying to think and pray. 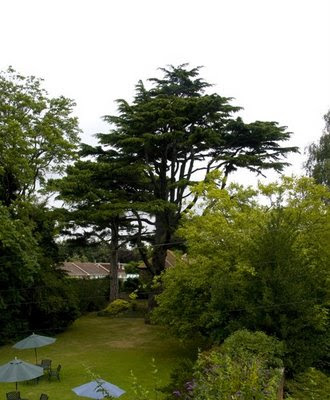 
It is raining – a very English rain. This is a gentle quiet rain, barely felt on one’s face if you walk out in it. My mother would call this a “lady rain,” as opposed to the gully washers of West Texas that pelt one with drops the size of marbles.

It is Sunday morning, and the quiet in Canterbury is palpable. There is no air conditioning in this hotel, so I slept with the windows open. I was awakened by the sound of doves cooing outside the window.

It was a pleasant change from the raucous noise of the sea gulls that normally provide the backdrop for every conversation held out of doors here. I don’t know where the sea gulls are this morning, but I’m grateful for the respite from their racket.

I have been in Canterbury for the Lambeth Conference, the once-every-ten-years gathering of the bishops of the Anglican Communion. I have been writing for and editing a daily newspaper – The Lambeth Witness -- published by a coalition of progressive groups from Anglican churches in Canada, the UK, the USA, and Africa. The work of writing for and putting out a daily has been intense and unremitting. You can see every issue we published here.

But that is not what is exhausting. What is exhausting is the emotional and spiritual drain of witnessing the continued marginalization and scapegoating of LGBT Christians by the bishops of the Anglican Communion.

In the latest “Reflections on Lambeth” document, statement 103 says, “The ordination of an openly partnered homosexual bishop and the open blessing of same sex relationships has had many negative results including . . . .” Then it lists ten examples.

Sentence 104 says, “There have also been positive results in parts of Canada, the US and England when homosexual people are accepted as God’s children, are treated with dignity and choose to give their lives to Christ and to live in the community of faith as disciples of Jesus Christ with fidelity and commitment.” But no examples are offered.

Getting that one sentence included in the draft took days of work by supportive bishops. Earlier drafts said nothing positive at all about LGBT Anglicans.

But it is clearly a bone thrown to the dogs under the table.

In the Saturday press conference about the Anglican Covenant and the Windsor Continuation Group the Archbishop of Hong Kong, Paul Kwong, said he found it "a little disappointing" that the Lambeth Conference is ending on Sunday with "no concrete action" to resolve the issues around sexuality that have triggered deep divisions within the Anglican Communion.

"We respect what people [The Episcopal Church and the Vancouver-based diocese of New Westminster, which has permitted same-sex blessings] are doing, that what they've done is correct in their context. We're not asking them to defend that what they're doing is right, but what sacrifice can you make for the interest of the Communion, of the church?" he asked.

“I value the listening process. Let every single voice be heard. But we need action, something concrete,” he said.

In light of this, we ask these questions:

How can “every single voice” be heard when the only bishop who could speak out of the lived experience of a homosexual in a partnered relationship was deliberately not invited? By what authority do the primarily male, [supposedly] heterosexual bishops – even the supportive bishops of the US and Canada – even negotiate on behalf of LGBGT Christians throughout the Communion?

Jim Naughton of Episcopal Café rightly names this.
“And the Communion doesn’t have the good grace to ask them to make that sacrifice directly, preferring to pretend that the Western churches have the moral authority to act as their surrogates. This is the feudal morality—lords making decisions for their vassals.”

And while we can understand all the talk of sacrifice – since Christianity if built on the notion that sacrifice can be holy – isn’t there a difference between sacrificing oneself for others and requiring others to sacrifice themselves for your benefit? And if there is a difference, what are theological and moral implications of the bishops forcing LGBT to sacrifice their vocations and loves as the moratoria do?

And lastly, we’ve seen that such moratoria do not work. The Episcopal Church offered up LGBT vocations and relationships with resolution B033, the Archbishop of Canterbury declined to invite Gene Robinson, and still most of the conservative bishops boycotted Lambeth. What makes them think continued scapegoating of LGBT Christians will make any difference to the Gafconistas?

If our bishops are willing to sacrifice our baptismal covenant for an Anglican Covenant, what does that say about the future of our church?


Not much that's good, I think.


As I write this, screams fill the air, silencing the doves and driving away the peace of the morning.


The sea gulls are back. The rain continues, harder now.
Posted by Katie Sherrod at 6:50 AM

"If our bishops are willing to sacrifice our baptismal covenant for an Anglican Covenant, what does that say about the future of our church?"

This is the question I keep asking myself and I come up with the same answer that you did.

May our bishops have the strength and courage not to do it.

Thank you SO much for your good works and your efforts during Lambeth!

I think there is another Communion to think of, it's coming soon...what will be name it...The Scottish Communion sounds good to me.