Rescuing the faith once delivered to all the saints 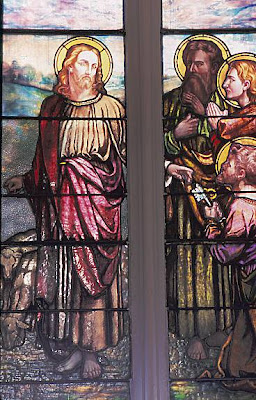 NOTE: This was written by the Rev. Bruce Coggin, a friend of mine, for a presentation at my parish. I think it is briliant.

Becoming a member Diocese of the Province of the Southern Cone would allow the Diocese of Fort Worth the opportunity and freedom to continue to practice the “Faith once delivered to all the saints” without being constantly distracted by the controversies and divisions caused by innovations hostile to traditional Christian norms.
Jan 9, 2008, letter from Bishop and Standing Committee
diocesan website

Except for purely Jewish Christianity, all the above varieties and more were up and running concurrently—and adherents of all called themselves Christians—about the time the woman who became St. Helena went to Palestine and brought back what she promised were relics of the cross Jesus died on. Her son Constantine was running the eastern half of the Roman Empire. Raised a pagan, he converted famously to Christianity and was busy raising it to the status of state religion. But which kind? He gave the various church parties an ultimatum: clean up your act and give me a church that knows what it believes, an instrument of unity and centralization instead of the morass of claim and counter-claim and diversity and uncertainty I see now. So the church did what it always does: it held conventions—or councils or synods as they called them—meetings where people met and argued and voted.
Constantine forced an issue that had troubled the church for a long time, namely that Jesus had not returned to gather in the faithful, and that meant Christians had either to abandon that part of their faith or expand their understanding of Jesus’ gospel to encompass the possibility of a long and undefined future. The first choice was not a choice, so the church had to think: if the Second Coming, the parousia, is delayed or not what we think it is, then how are we to live in history? The councils Constantine set in motion undertook that monumental task. Working with the scriptures—some of which did not get into the Bible, by the way—and the work of people like Clement, Ignatius, Irenaeus, and the other Church Fathers, they started knocking the edges off loose definitions. They excluded the gnostics as too gauzy, the Jews as too picayune and tied to the past. The purely secular need to achieve a degree of unity sufficient to guarantee the church’s survival drove them: there were plenty of applicants for the job Constantine had in mind for the Christians. And it paid off. The Nicene/Chalcedonian formula presented a Christianity erected on four bases: the creeds, the sacraments, the apostolic succession, and the scriptures, all defined by those councils—for the moment.
And a splendid formulation it was and is, still accepted by the majority of Christians today, though by no means all. At least part of its long success is due to the way it excludes and assimilates, rejects the outworn or the bizarre and accepts much that was then new and risky, closes the door on small certainties and opens it to the nudging of the Holy Spirit. Classic catholic Christianity
• accepts Judaism’s insistence on the importance of history but rejects its obsession with ethnic identity;
• accepts the gnostic yearning for salvation but rejects its grotesque mythical claptrap;
• accepts the eschatological hope of eternal life in the Kingdom of God but rejects historical eschatology, a cataclysmic close of history at a predetermined moment;
• accepts ethical freedom in the context of Pauline love but rejects the demands of the Torah and other hyper-detailed moral codes;
• accepts John’s Christology and sacramentalism, the belief that God’s incarnation in Jesus expands in history, and rejects the docetist view that history doesn’t really count.

The formula has worked well because it preserves what is essential, lays aside what is not, and remains open to the possibility of adjustment to accommodate undeniable historical circumstance—and to the leading of the Holy Spirit. Constantine’s insistence got good results. Earliest Christianity had no unified body of ideas that distinguished between Christians and non-Christians, true and ersatz Christians. It clearly was a religion subject to change and could respond to the challenges of changing times, diverse thought, and cultural differences. Some of that scope was lost when classical catholic Christianity emerged, but there was and is nevertheless unity in the questions addressed: what is the relation between God and man? and who is Jesus? The Nicene formula is the product of people being forced to answer those inexpressibly complicated questions in fairly short order. It has worked because it lets the church look both backward and forward, because it cherishes and lives in tradition but is quite ready to make far-reaching adjustments if circumstances dictate. It is first and last the product of consensus, of people struggling among themselves and praying for the Spirit’s guidance to come to an arrangement where Christians find room to exercise their faith, with or without much dogmatic sophistication, and let others exercise theirs. There’s no denying that some of the councillors, like Athanasius, thought it was altogether too expansive; his creed damns lots of people. For most, however, the formula was just broad enough to include them. The Arian majority gave lots of ground to the conservatives, and both sides won.
Our diocesan leadership’s resistance to many things going on today in the Episcopal Church is not only their indisputable right, it’s entirely traditional: Christians have from the very beginning had to figure things out for themselves. Jesus left us only the most basic—though entirely sufficient—tools to work with: His love, the Holy Spirit, a mystical sacramental bond with him in baptism and the eucharist. All the rest we have to piece together as experience and circumstance teach us, and we have never all sung in unison. Never. Our leaders in Fort Worth err in supposing and saying we ever did, and their nostalgic formula is as illusory now as it was when Jude used it. And thank God for that! Is revelation closed? Is the church finished? Are all the answers in? The notion of a neatly defined, readily available packaged and bottled Christianity, one size fits all, is foreign to this history. That doesn’t mean we can play fast and loose with our religion, and thank God for the conservatives in the Episcopal Church who ask enthusiasts hard questions and avoid doing anything rashly. It does mean we dare not—cannot, indeed—preclude the movement of the Holy Spirit in the church to deepen our understanding of God and of Jesus and our own place and work in the spread of the Kingdom on earth. The faith of God in Christ has been given to the saints, is being given to the saints today, will be vouchsafed to future saints until that Kingdom comes.
Our job is not to protect it; God requires no protection. Our job is to be open to it, to do our best to understand it, and to work with those who are with us—and those who are against us—and trust God to take care of the tares among the wheat.
Posted by Katie Sherrod at 12:37 PM

WOW! thanks, Katie - this is outstanding. Any chance of obtaining permission to copy/distribute this? I am so sick of 'once delivered to the saints'! My bishop notes dryly 'I wish I could see what the receipt from the saints has listed on it."

It always seems to me that when conservatives are faced with clear evidence of their intellectual failures, they simply use slogans and insults to keep themselves whole... easier to denigrate their opponents than change themselves. May God have mercy on them (and, by the way, on me for my open contempt of them...)

You may certainly copy and distribute this, as long as you give credit to Fr. Bruce Coggin of Fort Worth as the author.

I'm a wee behind in my blog reading. This is simply brilliant. Thanks for posting it, Dr. Sherrod

This post is very interesting. It does, however, contain a number of historical and theological mistakes that undercut part of what it's trying to do. For instance:
-Constantine do not impose a uniformity on Christianity. He convened a council to tackle one issue--not *if* but *how* Jesus was divine.
-The fundamental formulations were not Constantinian either. The basis for the Nicean creed was not hammered out at Nicea. Instead, it was based in the baptismal creed of Caeserea. Compare our Apostles' Creed--it was the baptismal creed of Roman for which the first manuscript evidence is in the second century. Rather, the council adjusted a few phrases to exclude Arian belief.
-There was no compromise with Arian belief. The debate was whether Jesus was a creature created by God and bound in time. The council declared that he was neither. It's pretty much an either/or kind of thing.
-Athanasius didn't write the Athanasian Creed. In fact, it's far more likely to have been the work of Vincent of Lerins, a fifth century Gaulish monk who died about a century after Athanasius.

The post is also working with a rather atomized understanding of early Christian streams of thought that emerges more from modern academic studies than from early church documents. Yes, there was variation in Early Christianity. Yes, some of the beliefs listed here do match up with certain groups mentioned by early writers like Irenaeus and Eusebius. However, scholars like to isolate "pure" forms that do not seem to have existed as independent communities after the first century.There was much broader agreement on the shape of early Christianity than this post posits.

I certainly don't agree with what The Diocese of Fort Worth is doing. The use of the phrase "the faith once delivered" does not, in my estimation, refer to what they think it does. However, that does not mean that we should take liberties with Church History to score rhetorical points.

Thanks very much for this, Ms. (You're a Doctoris now?) Sherrod and Fr. Coggin, and to Counterlight's new blog for the headsup.

The 'Presiding Bishop(ess)' has publicly question the uniqueness of Jesus the Christ as the mediator of salvation.

How can ANY definition of the 'faith once delivered' by reconciled with that woman's public statements?

Dear Baron,
I would use your given name if you had used it.
This calumny against the Presiding Bishop has been debunked again and again. Do your homework. She has done no such thing.