MANY Fort Worth Episcopalians are delighted 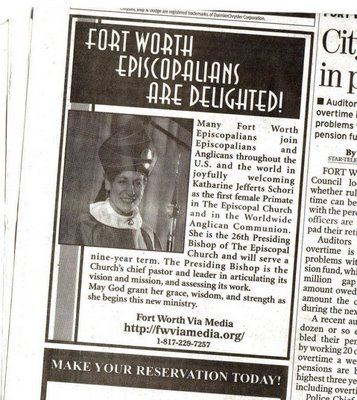 Today this ad ran in the local Fort Worth newspaper.
On November 4, Katharine Jefferts Schori was formally invested as Presiding Bishop of The Episcopal Church. The event was greeted with cheers of joy.
That was not the case in the offices of the Diocese of Fort Worth, whose leadership has requested “alternate primatial oversight.”
But very many Episcopalians in Fort Worth did celebrate Katharine’s investiture. For us, it was a huge gift of hope, something that’s been in short supply around here for a long time.
People who have hope are much more likely to have courage. Hence, the willingness to go public with their joy over Katharine's being Presiding Bishop.
Our diocesan convention is this weekend. Our leadership wants delegates to approve their request for ALPO and to vote to withdraw from Province VII – a move many believe is illegal. All these are actions meant to further disassociate our diocese from The Episcopal Church.
Many of us have been working hard for years to keep our parishes and this diocese in TEC. We are outnumbered on the floor of convention, but increasingly I believe we are gaining numbers in the pews. This always has been a clergy-led movement, and in this diocese clericalism is rampant. People have been trained for decades that “father knows best.” Many of our clergy are really good at stirring up fear and anger at the mean ol’national church.
But people are getting really tired of the constant negativity and whining. They want to get on with the work of the church. They don’t want to bash their gay and lesbian neighbors. Women’s ordination is no longer a big deal with most people here. Parishes are realizing that they are families, worshipping communities in which relationships – with God and with one another -- matter more than scoring political or so-called theological points.
They don’t want to be made “pure” at the cost of losing part of their “family.”
Even so, I predict that the resolutions seeking to distance us from TEC will pass. There’s too big a “lock” on the delegates’ votes. Our leadership is fond of martial images and they’ve been marketing this “war” for a long time. Maybe too long.
I think this will be a case of winning the battle while losing the war.
Posted by Katie Sherrod at 10:25 AM

Katie and all,
You have been in my heart and prayers and the hearts and prayers of so many of your fellows across this national church. You have been a light in darkness and your courage is an example to us all. Keep the faith, and know that you are not alone. Even now, at "Father Jake Stops the World", people are brainstorming ways to support those who will be abandoned by the bishop and convention of San Joaquin. We are here for you, too, if and when you need us more materially than our prayers.
God bless and keep you.
The Reverend Lois Keen
Priest in Charge, Grace Church
Norwalk Connecticut

Many of you may rejoice, but many more of us in the Fort Worth Diocese do not rejoice and do support Bishop Iker and the Standing Committee.

And truly, we will continue to pray that your eyes are opened and ears unstopped to the real Truth...not as opinions, experiences or tradition have shown, but as revealed in God's word.

God Bless Bishop Iker and the FAITHFUL of his diocese!

Don't let the bean-counters (Sioux), opinionated anti-opinionated (eve), or believers in Jack "My vows mean nothing" Iker's church (as opposed to TEC faithful) get you down...